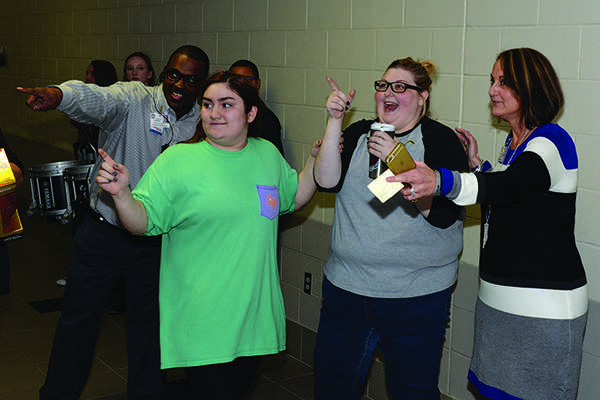 Journalism teacher Samantha Berry and coach Erin Bryant won the First Community Credit Union (FCCU) Stars in the Classroom reward, through a student-nominated competition. As part of the award, each teacher won an autographed jersey from Houston Texans inside linebacker Brian Cushing, two tickets to the Texans vs. Patriots game on Dec. 13, two sideline passes as Cushing’s guest for the game and a parking pass for the event. The teachers were nominated for the honor by senior Chloe Trejo and sophomore Payton Hughston for Berry and Bryant respectively.

For nominating their teachers, both Trejo and Hughston met Cushing alongside their teachers and received an autographed football. Administrators pulled Hughston out of the Aspire Test to receive the news and meet Cushing in the front office.

“I was overly excited,” Hughston said. “I was like oh my god, he’s so tall; oh my god, his teeth are flawless; he’s like perfect. He was a lot more muscular than I thought he’d be.”

The award meant a lot to Hughston, who said it showed Bryant he is a great teacher and he inspires his students.

“[The best part was] just getting to see Coach Bryant’s reaction because he had no clue it was coming; he really enjoyed it,” Hughston said.

Bryant said he found out he had won in front of his students.

Being nominated and meeting Cushing was a memorable experience for Bryant.

“When I first saw him, I just thought how cool it was to meet him,” Bryant said. “He seemed very genuine, and I appreciate how he interacted with my students and his willingness to take pictures with my class. Seemed like a classy guy.”

Bryant said the award shows how much he cares about his students and reflects upon relationship he has with them.

“I try to teach them lessons that they can take beyond the classroom and into life; I incorporate real-life experiences of my own,” Bryant said. “I feel that this allows students to see me as more than just a teacher, but an actual person who can relate to them as individuals. I am always honest with my students, and give them the respect that I feel they deserve, and that they earn.”

The best part for Bryant: knowing he had a positive impact on a student.

“It is always great when you realize the impact teachers have on students’ lives,” he said.  “Everyone likes to know that the job they do is appreciated, and when it comes from a student, it means that much more. Of course, the tickets and jersey are pretty sweet too.”

Bryant said he’s thankful to the Houston Texans, Brian Cushing and FCCU for selecting him as a Star in the Classroom recipient.

“I would also like to thank my students who help me everyday to become a better teacher,” he said. “Most importantly I have to thank Payton Hughston for nominating me for this distinguished award. Payton represents what is great about our student body here at Cy Creek, and I am truly blessed to have the opportunity to affect students’ lives in a positive way.”

Berry, a third-year teacher at Cypress Creek and last year’s 2015 Spotlight Teacher, said the experience put her outside of her comfort zone but in a good way.

“[I was] overwhelmed,” Berry said. “It was all so fast, I didn’t have time to emotionally prepare for what was happening, and also I’m just kind of someone that I have to know what to expect and I had no idea.”

Trejo said Associate Superintendent Roy Garcia accidently tipped her off on the secret when he commented ‘Berry was having a good week especially with Brian coming today.’

“I walked in, and it’s all the cheerleaders and this Chronicle reporter is trying to get my name and get pictures of me and I was like ‘Oh my God I am meeting Brian Cushing,’” Trejo said.

Trejo said she enjoyed the award for both herself and for Berry.

“When I first met him, I was crying because I knew he has a wife and everything, but I was like ‘he’s here for me, he’s here to see me’ and I was crying; it was a great day,” Trejo said. “But I think the best part was that ultimately Ms. Berry got the award and it was kind of cool that we got praised by Brian.”

Berry said even though she enjoyed meeting Cushing and winning the tickets, she most appreciated the nomination letter from Trejo.

“Reading the letter that Chloe wrote me, that was the best part, because even though the football was cool and the jersey’s cool and of course the sideline passes are cool and the tickets are cool, knowing that a student appreciates what you do and appreciates you as a person is why teachers do what they do,” she said. “So that for me was the biggest gift, having that letter.”

Trejo said she chose Berry because she stands out from the rest of her teachers in how she cares for her students.

“I mean, I know other teachers care about their students too,” she said. “But she’s always trying to make us do our best and she actually wants to see us succeed in the future.”

Berry said the award represents her students rather than her own achievements.

“I think it shows not really anything about me so much as it shows the bond that we have in journalism,” she said. “I think that it represents all of us as a whole, that we’re a family and that we support one another, we appreciate one another. It’s really not just a win for Chloe and I, it’s more of a win for all of us and it represents that bond.”