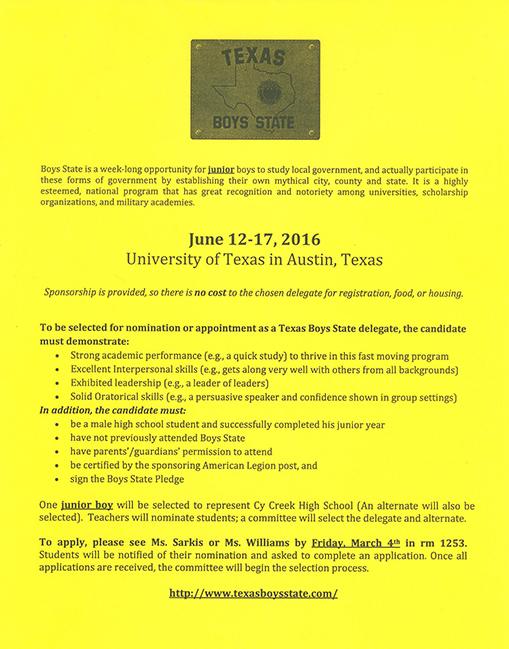 Applications for Boys State and Girls State opened up for students last week. Girls and Boys State will be held June 12-18 at Texas Lutheran University and the University of Texas.

The programs allows one boy and one girl representative from Cy Creek to attend an annual camp that teaches students about camaraderie and about the world of politics and government structure. These state events provide students with the opportunity to study and participate in their own hypothetical government. While there, students develop leadership skills and seize the chance to meet students from all over the state of Texas. Counselor Dena Sarkis said students do not have to pursue a career as a politician, but the camps provide a great way to build resumes and show leadership qualities.

“It’s a very cool opportunity for networking purposes, because kids get to meet kids from all across Texas,” Sarkis said. “[There’s] camaraderie, and it’s a resume builder. It’s great on all of those levels.”

Students only need to hold an interest in government processes and how the system works.  Junior applicant Abby Akard said she hopes to go in order to learn about government and the way things work.

“I’m trying to figure out and understand politics,” Akard said. “I think [Girls State would] be a good way to figure that out.”

Several state representatives, senators and politicians have built their foundation from attending Boys and Girls State. Also interested in politics, junior Daniel Lehman said it will be a good experience to get out there, socialize, meet new people and see different ideas.

“I’ve been doing debate for seven years, so with that you get really great insight into how people think and how they argue,” Lehman said. “There’s never a right and wrong answer. Everything’s up for debate.”