From Court to Crutches 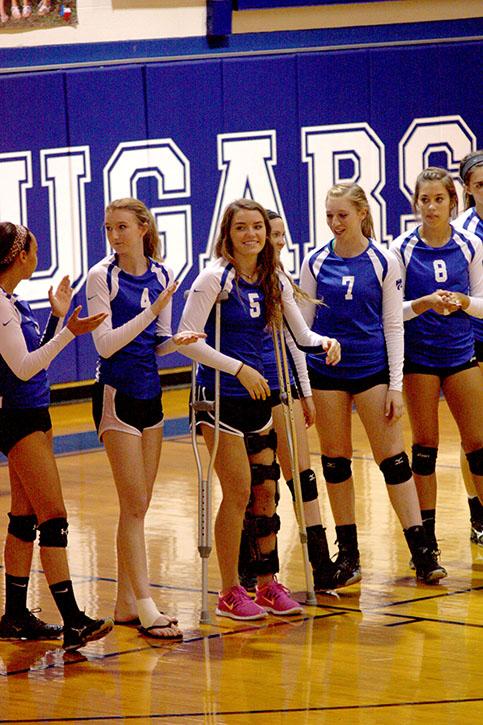 One crutch in front of the other: Junior Varsity volleyball player Ashleigh Teal steps forward when she is recognized before the game starts.

Varsity volleyball player and  junior Ashleigh Teal suffered a major injury which left her sitting on the bench for the remainder of the season.

Ten weeks ago, Teal underwent surgery to repair her torn anterior cruciate ligament (ACL) and her meniscus. With having the surgery, she cannot play on the team until next season.

“Right after surgery, I couldn’t walk on  [my knee],” Teal said. “I couldn’t put weight on it at all, so I was on crutches for two and a half weeks. And then I went to the doctor again and I had to start walking on it, but I can’t do any physical activity at all.”

Teal made the decision to have the surgery sooner rather than later.

“I wouldn’t to be able to recover and be back in time [for next season],” Teal said. “The longer I waited, the longer until full recovery.”

Even though Teal cannot physically play on the court, she still helps out the team from the sidelines.

“I basically act like an assistant coach,” she said. “I help them find open areas in the court.”

Teal said she cannot just sit on the bench. If she gets hurt, she usually sits out for a week and gets back on the court.

“I’m so injury prone that I’m really use to rolling my ankle and having to sit for a week and then be ready to come back the next week, but this time I couldn’t,” she said. “I have to wait several months.”

Friend and teammate, junior Kelli Muhl, said the team could not believe it when Teal got hurt on the court.

“She was trying to save a ball, just giving it her all, and fell down in pain,” Muhl said. “She rested for a week and came back, she tried to play again and fell, immediately I could just tell something was really wrong and she was really hurt.”

Teal said dropping everything and not playing for a long time is difficult, so she relies on her friends to help her cope with recovery.

“I’ll sit on the bench with her and talk about what’s going on on the court and try and stay involved, even though we both aren’t physically on the court,” junior and teammate Morgan Elliott said.

Teal’s recovery time interfered with her being able to physically participate in playoffs.

“Losing a player is tough especially a competitor like Ashleigh,” Varsity volleyball coach Tami Combs said. “We lost her before we even started and that was a tough role to fill.”

“She is a true competitor,” Combs said.  “Ashleigh is very determined and hungry for the game.  I know next year she will come in ready to compete and do what she can to help bring the team even further.”

One Response to “From Court to Crutches”

From Court to Crutches