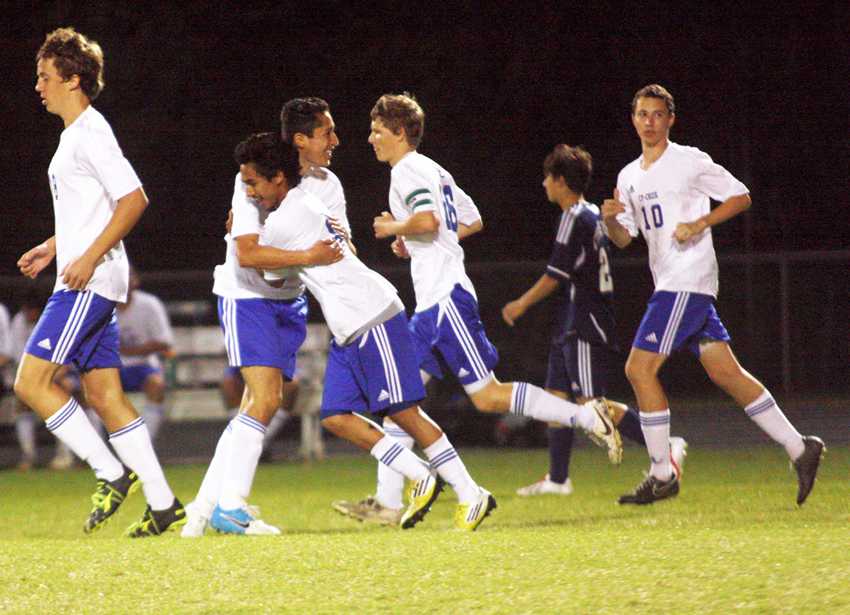 It was the last game of the winless season.

And the last time for seniors to play.

“It didn’t start off well because the other team scored in the first 2 minutes,” junior center midfielder Giovanni Gallardo said. “So we thought we were gonna lose.”

Junior outside midfielder Jose Arriaga said the boys’ varsity soccer team had everything but luck.

“It was a tough game at first, but we ended up playing harder,” he said. “We could have started off stronger in the beginning of the game.”

During the first half, senior attacking midfielder and forward Jack Ehrle turned the game around when he scored two unassisted goals against Cy Ranch.

“Their center back fell down, and he was kinda hurt so he couldn’t play how he usually would,” Ehrle said. “It just made it easier for us. It felt really good to score two goals in the last game.”

Ahead 2-1 in the second half, the team’s luck seemed to have changed.

Junior outside midfielder Jose Molina, assisted by senior midfielder Thomas Shepherd, scored the last goal during the last 15 minutes of the second half.

They secured a 3-1 victory.

And ended the losing streak.

“We were really proud we won because we were determined to win this time,” Molina said. “We were just happy.”

Senior soccer captain and outside midfielder Alan Martinez said he felt confident the team had a chance to win.

“I guess we dominated that game,” he said. “We felt good because it was our senior night and we just knew we could beat that team. We weren’t surprised, we knew we were gonna win. It felt good, we scored, we won. It was just a good feeling.”

The season ended Friday with a final record of 3-17 overall and 1-13 in district.

The team won its final game of the season, but not without a few obstacles. Martinez said the game was close due to some minor errors.

“We passed the ball around,” he said. “Towards the second half I lost the ball. I was able to get it back.”

“I guess we need to get punished more at practice,” he said. “Work hard and practice.”

Junior goal keeper and right defender Felipe Rodriguez said O’Dear helps and motivates the team everyday to prepare for their next game.

“The coach is a good and tough coach that will push you to your max, and it will pay off in the end,” Rodriquez said.

Martinez said the coaches put a lot of time into the team and that helps with motivation.

“The coaches do a lot,” Martinez said. “They’re always trying to do something to help us out, like ways to try to figure out how to make the team better.”

“We don’t work as well as a team,” he said. “It’s more individual. The mistakes from everyone are all just lazy. We need to play harder.”

O’Dear said now that the season is over, the team will begin preparing for next year.

“Let’s just say we didn’t perform the way I thought we would,” O’Dear said. “We’re gonna need to improve on every aspect of the sport. It’s a lot of things. It’s not just one little thing, and we’re gonna have to improve on all areas.”

O’Dear said he was not surprised the team turned the game around.

“I was excited they finally played the way I knew they could,” he said. “I don’t know if they felt pressured, I think they felt like that was their last time they got to play and give it everything they’ve got, what I wish they would have done all year long.”