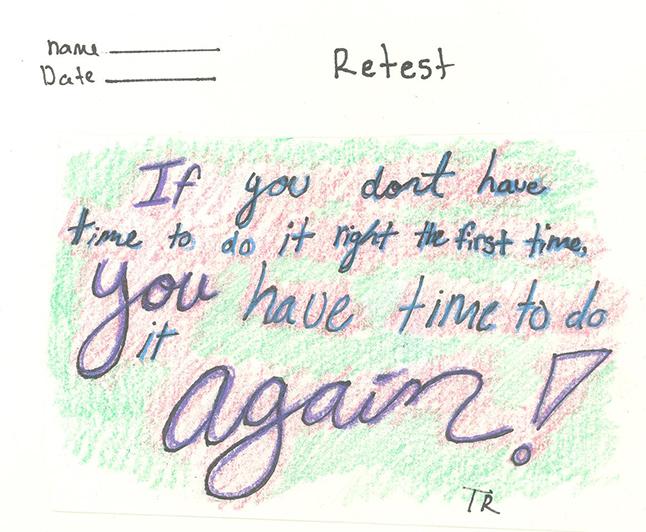 The school administration has invoked a new retest policy in order to have a structured system and promote success among students.

The new retest policy added new points to challenge students to keep the final grade they receive on the retest in an AP or K level class. When a student takes a retest and makes a lower grade, the student has to keep the grade he or she received on the retest. In addition, teachers require students to go through tutorials and do test corrections before taking the retest.

“We delineated between academic core classes versus elective courses performance day courses to help students achieve good grades the first time around on the test,” Associate Principal Maggie Wiley said. “The whole idea is decreasing the number of students that are not successful from the get go.”

Starting the 2013-2014 school year, the academy system has expanded to include the CHAMPS Academy, consisting of only freshmen.

“We are really big on transition,”Godbolt said.

The CHAMPS Academy helps the freshmen transition into high school by grouping them together for their classes except for electives and sports.

“They are housed together, but they still come out for their electives,” Godbolt said.

The CHAMPS Academy helps the freshmen grow and prosper in high school.

“We do feel benefits by keeping them all together because they feel a part of something.” Godbolt said. “They are connected.They feel a sense of well the upperclassmen have their academies while these freshman have their the CHAMPS Academy.”

The late bus runs once again after previously cutting it due to district budget constraints in the past years.

The late bus runs at 4:30 p.m. which allows students who need to go to after school clubs, tutorials and sports to have a safe way home without parents having to worry about providing transportation for their children. In order to avoid schedule conflicts, the district set the running time to best accommodate students, teachers and bus drivers.

“They (the district) have to make it all work within that time period to make it efficient as possible,” Wiley said.

To ride the late bus, students must obtain a pass from a coach or teacher and go to the small commons by 4:15. The late bus then drops students off at a checkpoint near the student’s home.

“The students have the opportunity to get additional help or participate in an activity that they might not have been able to participate in because of transportation,” Associate Principal Maggie Wiley said. “The biggest thing is you get to stay after school to get help with a class if you need it.”