‘Teaching them that their voice matters’ 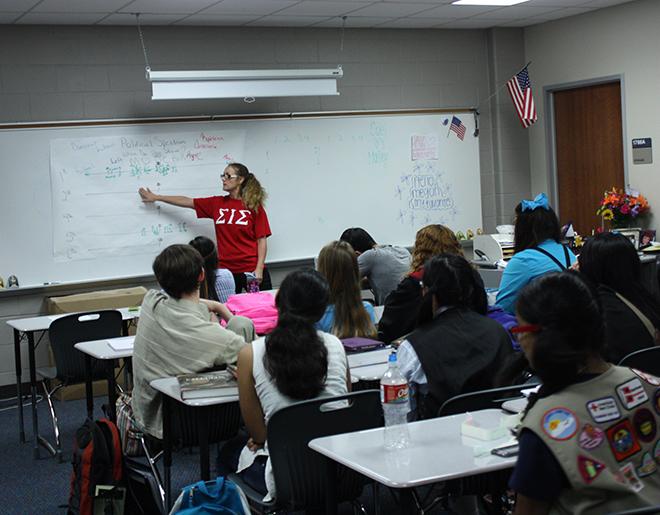 With every day that passes, government teachers help seniors realize their voices can make a difference, one student suggestion at a time.

Through the use of a class assignment, government students gain the ability to affect their classroom environment for the better. While the semester continues, they put forward suggestions to the administration concerning the school itself and later gain the opportunity to write letters to their congressmen and senators.

“There is a method to my madness,” government teacher and varsity cheer coach Nicole Cuellar said. “What I am doing is teaching them that their voice matters. I want them to become active members of the society in which they live.”

Using an assignment involving major student interaction of her own creation, she has opened the eyes of students for the past three years. This has remained an assignment solely practiced by K and AP classes, with L level government teacher and HOLA Club sponsor William Bozic maintaining his own assignments in his classroom

However, the other new government teacher, football and soccer coach Jarrett Shipman has taken to the assignment, directing it within his K classes. He said that student day to day exposure to the school and its workings creates an opinion different than that of teachers on what can potentially be changed.

“I think the student suggestions for me, as a teacher, makes me better,” Shipman said. “I think it’s good for the school as well. I think that it’s good to criticize, to get yourself criticized, because you can always become a better teacher. Nobody is perfect, you can always get better.”

Cuellar said she introduces the lesson by talking to the seniors and explaining to them that since they currently attend their fourth year in school, they have unique insight and opinions on school policies that other grades do not have.

“They’ve probably, at some point, complained among their peers about something,” Cuellar said. “But they’ve never talked to anybody who could make a difference.”

Students first identify what they consider concerns in the school, then create possible solutions. She then takes those student suggestions to the appropriate members of the administration.

“They do classroom suggestion, which brings it a little bit closer to home,” Cuellar said. “I can implement their suggestions immediately, at the local level, if you will. If they’re reasonable, I put them into effect so they can see how their voice can make a difference.”

As the assignment continues, the students prepare for the writing of letters to their congressmen, first at the state level, and then national level.

“Ideally what will happen is the congressman or senator will write them back,” Cuellar said. “Then they will have something, again, proving that their voice matters.”

She said she began the assignment in order during the 2010-2011 year in her K classes. Six semesters later, it has become a staple of her classroom.

“In the past I’ve certainly had some good suggestions,” Cuellar said. “It just seemed to me that as a whole, this class has been very excited about it. They had things I never would have thought about.”

She said student participation has been both enthusiastic and thorough. She cites various examples of unexpected issues brought forward, such as the placement of the vending machines, the availability of food during the C lunches, and the cleanliness of restrooms and the commons.

“According to Ms. Cuellar, the reaction was pretty phenomenal,” senior Fatima Sabira said. “She got a lot of inside scoops from what the students knew compared to what the teachers knew.”

Many students express their positive opinions about the assignment, with many believing they have finally found a way to make an impact in the school.

Cuellar’s assignment has been well received by members of the administration, and while she said she cannot lay claim to any changes in school policy, she knows that a difference is made by her work.

“I did hear this year that they were putting together some type of student panel for school suggestions,” Cuellar said. “I don’t know if this was prompted by this, but I would hope so. I think it’s a great idea.”

In the face of the odds of her student suggestions being implemented, she said she believes the important thing is that students, for the first time in their high school life, have received the chance to offer something to others.

‘Teaching them that their voice matters’