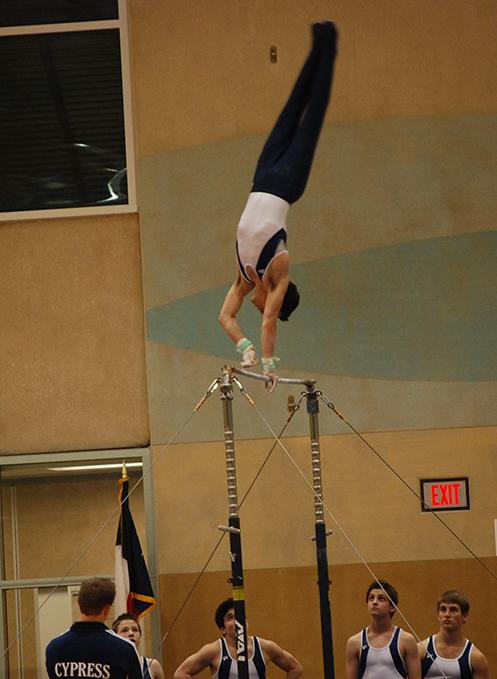 Alamo Challenge: February of last year in San Antonio, TX, Anderson performed on the highbar and placed second in Nationals.

Junior Levi Anderson trains every day with one goal in mind; becoming a member of the United States Olympic gymnastics team.

Training as a gymnast for about 13 years, Anderson went to Nationals three times and earned his rank as 21 in the nation. He’s determined to meet his mark by becoming the top 18th gymnast in the nation in order to qualify for the Procter & Gamble championships.

“Nationals was a great experience every year I have been,” he said. “I think the reason I didn’t make the P&G championships is because I needed a little bit of failure to truly succeed.”

Many people have motivated Anderson and his life’s decisions, but one person really caught his eye and stood out to him.

“My coach Nick Brooks: he influences me in a positive way because he makes sure I don’t screw up my life the same way he says he did,” Anderson said. “The main thing is that he helped me keep my mind straight at Nationals.”

Anderson and Brooks have a very rare relationship that not most coaches and students have. Brooks helps him through rough times inside and outside of his gymnastics life.

“I think because of our unique relationship that we have, it allows him to see that I want him to not only reach his gymnastics goals, but his life goals as well,” Brooks said. “Therefore, he is influenced by me and the decisions that I make for his workout plan.”

Anderson said his third year of going to Nationals was all about making the P&G championships.

“My shoulder gave out on rings,” Anderson said. “I missed the P&G’s by three tenths of a point. I mean it’s close, but I’m not quite there yet.”

“He went through a lot of injuries and has been able to overcome them and still become a successful Olympic gymnast,” Anderson said.

Nick Brooks said he could see the disappointment in Anderson’s face as soon as Anderson ended his rings event.

“Everything seemed to be going as expected, then he was up on rings, which is an event that he can nail with ease,” he said. “He missed the routine, and I could tell by the look in his face that he was upset and [he] thought that all the work he did to prepare himself had gone to waste.”

Eager to exceed his dream by becoming an Olympic gymnast, Anderson’s parents have been with him through thick and thin during this striving to become an Olympic Hopeful.

“All we can do is try to support his single most passion in life, gymnastics,” father Brian Anderson said.

Practicing for four and a half hours every single day, Anderson concentrates on meeting his goals to become a trainee for the Olympics.

“Every year, every pass, every turn I take in the gym is a step forward to the Olympics,” Anderson said.

Through all the stress and pressure, Anderson’s moving up to accomplish making it to the P&G championships.

“I figured out my weakness and did a little ‘extra grind’ in the gym and have been working toward making my weak events my best events,” he said.

Anderson’s life revolves around gymnastics and said his ultimate dream’s going to the Olympics.