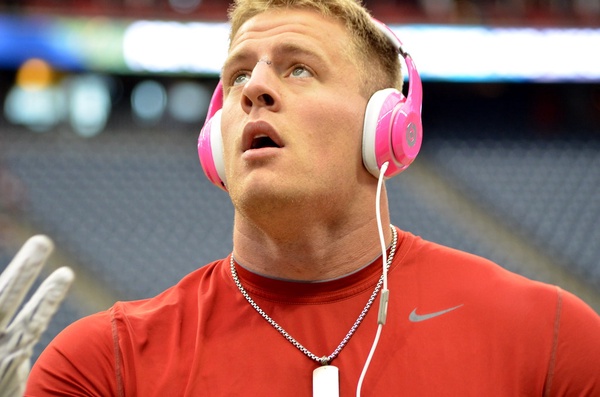 Free agent pass rusher J.J. Watt has agreed to a two-year contract with the Arizona Cardinals, the team announced Monday.
Terms were not disclosed but a source told ESPN’s Adam Schefter that the deal is worth $31 million and includes $23 million guaranteed. Before the Cardinals announced the agreement, Watt broke the news, of course, by sharing a photo on Twitter.
Watt, 31, was released by the Houston Texans on Feb. 12, ending his 10-year run with the franchise. Four days later, Watt’s former Texans teammate, current Cardinals wide receiver DeAndre Hopkins posted a photo of him and Watt photoshopped in a Cardinals uniform on Instagram with the caption: “Let’s finish what we started…” And it seems they will do just that.
In Arizona, Watt will be paired with fellow pass rusher Chandler Jones, who leads the NFL in sacks since he was drafted in the first round in 2012 with 97. Second during that span is Watt with 95.5.
Watt was drafted by the Texans in 2011 with the No. 11 pick and became the face of the franchise, winning three NFL Defensive Player of the Year awards from 2012 to ’15. Watt is one of three players to win that award three times. Watt, a five-time Pro Bowl selection and five-time first-team All-Pro, Watt was by far the most productive pass-rusher in Texans history, with 101 career sacks. But of course, just like every other Houston star, Watt becomes dissatisfied with how the team was managed and ran. DeAndre Hopkins was traded for a second-round pick, the Texans secretly hired their GM (QB Deshaun Watson found out on social media), and aren’t close to good enough to win a championship for the aging Watt. Arizona gives him a chance to do what Houston never could — let him flourish without carrying the load. I’ll just copy-paste hits when Watson gets traded.