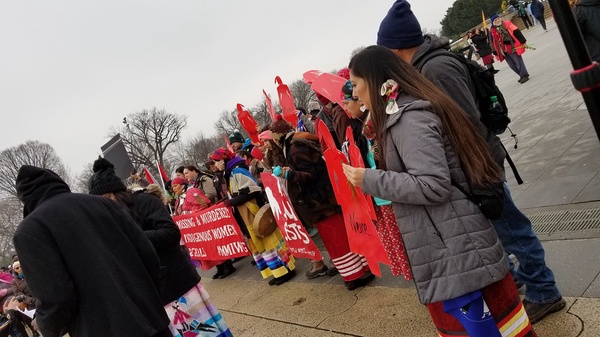 Viral footage of white Catholic students clashing with a Native American man after the video swept across the internet over the weekend. Initially, what happened appeared clear-cut: Young boys, mocking a peaceful Native American elder. The boys had critics early on, however many defenders stepped forward after additional video footage emerged showing a different perspective of the confrontation– turning the incident into a politically charged controversy.

On Friday, videos began to spread online of a teen boy wearing a Make America Great Again hat staring at an older Native American man playing a drum and singing on the stairs of the Lincoln Memorial in Washington, DC. The video showed other boys many also in MAGA hats, laughing and looking on, seeming to make fun of the man at times. The footage quickly picked up steam online, and included the narrative that the boys harassed the Native American elder at his Indigenous Peoples March.

As new information emerged and the full video came out, the preconceived image of what happened on the Lincoln Memorial stairs started to shift. Nathan Phillips (the Native American at the center of the controversy) spoke with multiple publications about the incident, saying he wanted to diffuse a tense situation between the teens and another group nearby, later identified as the Black Hebrew Israelites. Longer videos have emerged showing the Hebrew Israelites taunting the students, who then started chanting and shouting (including Phillips). The students still presently gather negative attention, especially Sandmann due to his high level of disrespect.

The saga has stirred up many on the right, who say that the students’ unfair treatment was due to the media, running with one narrative before having the full picture. Some have essentially argued that young people sometimes just do dumb stuff, and that they should not receive this much humiliation. Some journalists have said they should have waited for more information, while others say the teens deserve the public shame.

President Donald Trump has weighed in on behalf of the teens, indicating his awareness he can leverage this issue to his political favor. The news cycle runs so fast nowadays that sometimes the media cannot double check all the facts before certain news outlets run a story on live TV. However, that does not excuse the narrative that came from it– nor does it excuse the boys’ behavior, or any of the groups involved.