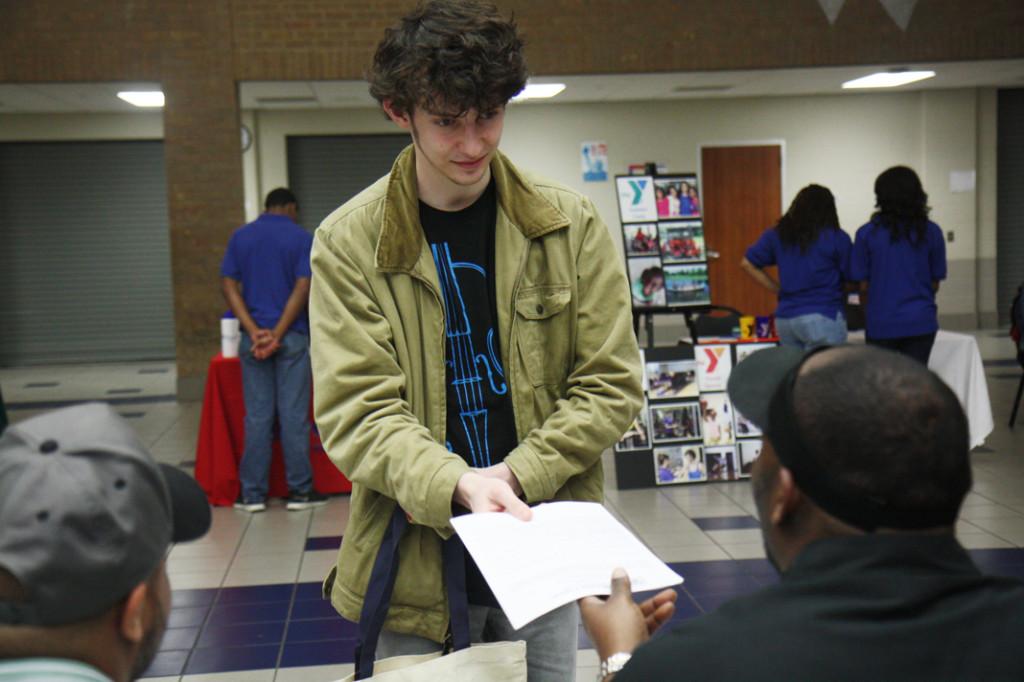 Looking for work: Senior Hollis Jenkins submits an application to a possible employer. He hopes to obtain an internship in computer sciences. Photo by Veronika Schiebler

More than 200 job seekers and 52 businesses came to the Business and Finance Academy’s first community job fair on Thursday.

“I thought it was just excellent that every aspect of it went quite well,” said academy principal and job fair coordinator Vallorie Mason. “Initially I didn’t think a lot of businesses would come because it was at a high school and they might have thought that it was just for high school students and not adults as well.”

Guy Matteson, co-owner of the Jimmy John’s stores on Cutten Road and on Highway 290 said they handed out menus for potential applicants to memorize and test over when they bring in their resume. In preparation for the event, Jimmy John’s made platters, served some of the sandwiches at their booth and also donated sandwiches to the school.

“I’m always looking for a time to go into the community and get my name out there and find a rockstar employee,” Matteson said.

If a person wrote on the application that Cy Creek referred him or her, then the applicant would move up on the list, he said.

“We have a lot of good applicants and this is something we’ve been having trouble with,” Matteson said. ”Jimmy John’s is all about having fun and getting out there in the community.”

Massage Envy brought brochures and applications to their booth at the job fair.

“Mostly people are looking in sales,” said Ethan Buckles, Massage Envy representative. “Since we’re at a high school, there aren’t many licensed masseurs.”

“It’s not exactly how smart they are or how professional they look, it’s about their personality,” she said.

Junior Travis Gaines said he wished the fair coordinators would have reminded the students more about the job fair. He said he forgot about the event date until that day but, he fortunately prepared for the event ahead of time so he could make a good impression.

Lone Star College representative Laura Lyn, who attended the fair, said she also comes to campus every Monday and talks about workforce training to interested students.

“I was hoping to help anybody who was interested in improving their job skills so they are more marketable,” she said. “I think this was really worthwhile and I hope more businesses come next year to make it better.”

Senior Jeffery Black said he felt like the employers did not know how to approach high school students. He said he thought the fair was for more college students.

“Next year they need to describe it better, like what companies are going to be here,” Black said.

Marine Sgt. Wayne Rudisill, who recruits on campus every week, said he found out about the job fair because he noticed the flier when he checked in at the front office one day and thought it would be a good idea to participate.

responsibility in different avenues,” he said. “If they have a dream or idea I want to at least help them achieve it.”