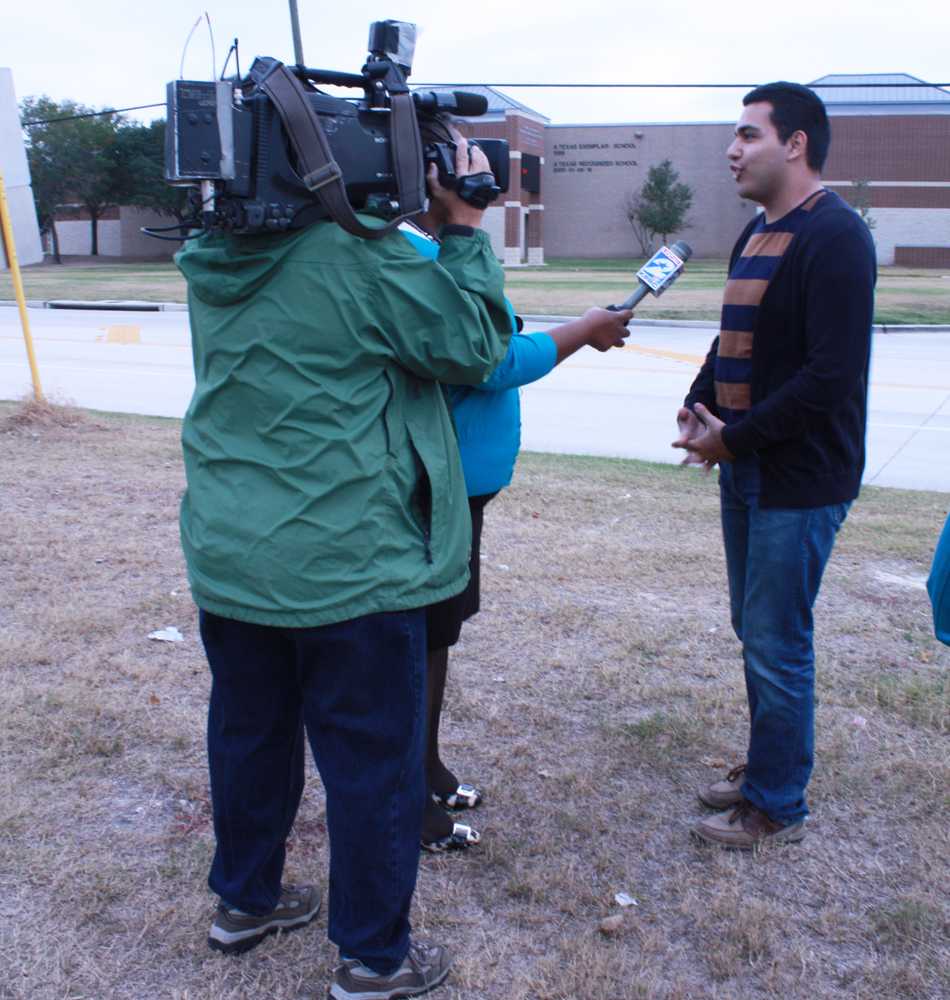 After the recent Sandy Hook Elementary shooting in Newtown, Connecticut, schools across the nation re-evaluated the safety of the school environment.

“It doesn’t affect us physically,” campus officer C.J. Davis said. “But as far as mentally, it reminded us that there are dangers in the school, and that if anything, it reminded the students and staff like, ‘Hey, you guys need to help report suspicious people that you see,’ because that’s how we receive reports, if the kids report them.”

Earlier in the year, a student on campus was caught shooting a BB gun during lunch hitting another student in the head. In November, another student was arrested for possession of a gun on campus.

“Anytime we get a tip that someone has something they should not have on campus, whether it’s drugs or a weapon or anything, you get a little nervous because you don’t know what kind of situation you are walking into or what the reason is or if it’s true,” associate principal Maggie Wiley said. “More often than not actually I think the tips don’t turn out to be anything and so it’s hard to keep the balance between heightened sensitivity to it and just not taking it too seriously.”

For the November incident, it took administration less than 30 minutes to confiscate the weapon and put the student in custody of the police.

Another recent incident involved the shooting at the North Harris Campus of Lone Star College. Aquatic Science Teacher Brittany Hooks said she found out about the Lone Star incident in her seventh period class from a student who received a text from her mother.

“I have one previous student that goes to that campus,” she said. “He sent me a text message saying that he was OK and that he wasn’t even anywhere near the incident.”

Hooks also said that she does not think the incident was a big deal.

“I mean even the sheriff is making it seem like it wasn’t that big of a deal because it was between two people,” she said. “The media made it a bigger deal than what it actually was or is.”

Senior Remington Connors said he found out about the Lone Star incident on Facebook.

“I think that it’s scary because it could happen here since it was so close,” he said. “I thought it just shows that it can happen anywhere. There’s a lot of weird people out there and there’s like easy access to them [guns].”

Davis said the administration always takes a firm stance on safety for the students and tries to prevent things happening by quickly responding to tips and rumors. Campus officer Jessica Taylor said the school has put into effect good safety precautions that they practice regularly and that the school is as safe as any other school.

“[Sandy Hook] has definitely placed school administration on more high alert, taking more security precautions,” she said. “Always plan on the unexpected and mainly focus on the safety of the students.”

Principal Sandy Trujillo said she believes administration should not have a knee jerk reaction to incidents. She said the school should always be extra aware and have systems in place that will protect the students.

“Well I think it’s affected all of the schools in the nation because we have to realize that we are all mortal, and that we all live in a society that we have all kinds of people, and we have to be extra vigilant to take care of our kids at every school,” she said. “In fact at every mall, hospital, everyplace where we have large groups of people gathering, we have to be more careful. I really think we have to be a kinder community because the kinder we are, the more intuitive we are, the more we listen to what people say to us, the better we are going to be equipped to help people who are struggling with emotional concerns.”

Trujillo said she could not be more proud of the way students and teachers interacted to keep the November situation safe.

“There are weapons on every high school campus across the nation,” she said. “You hope that your kids and your teachers and your administration have a good enough relationship and a good enough trust in each other that they will support each other and work together to make sure this school is safe.”

Head track coach and World History teacher William Vacek said he thought the situation was handled very well. He said there could be several reasons why a student would bring a gun to a school.

“It could be that this person might have a vendetta towards someone, it could be that he or she was bullied in regard to an incident so wanted some extra protection or could be that this person is just a little bit insane, who knows,” he said. “Anytime you have an incident like this it doesn’t do any good for the reputation of a school. It’s like if a member of the football team gets caught cheating in the class, well then all football players cheat, type of thing.”

Junior Anastasia Harrison said she thinks the news has made a bad image of the school.

“The kids I work with are like ‘Oh, I saw your school on the news again,’ and it also makes kids feel unsafe to go about in their community.”

Trujillo said she never worries about the news vehicles outside the campus, but the school makes the news for the wrong reasons.

“I have to know in my heart that this is a great place and we have great kids and that we have great adults,” she said. “However the newspaper wants to report it they are reporting one incident out of 3,300 kids and 180 days out of the year. They have got to report the excitement. I get to enjoy the day-to-day joy that comes with being on this campus everyday.”