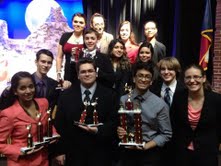 Lots of hardware: the team standing with their winnings. Photo courtesy of Cy Creek Speech and Debate

The Speech and Debate team competed at the Magnolia High School Debate Tournament on the 11th and 12th of January, and brought home over 23 awards and recognitions.

The team was rivaled by 20 other schools in the tournament, but won 1st place Overall Sweepstakes as well as many individual awards for students:

“We did very well that tournament, we had a lot of people from our team get to different finals and different events and get more points towards qualifying for state so it’s very exciting,” Kimbell said.