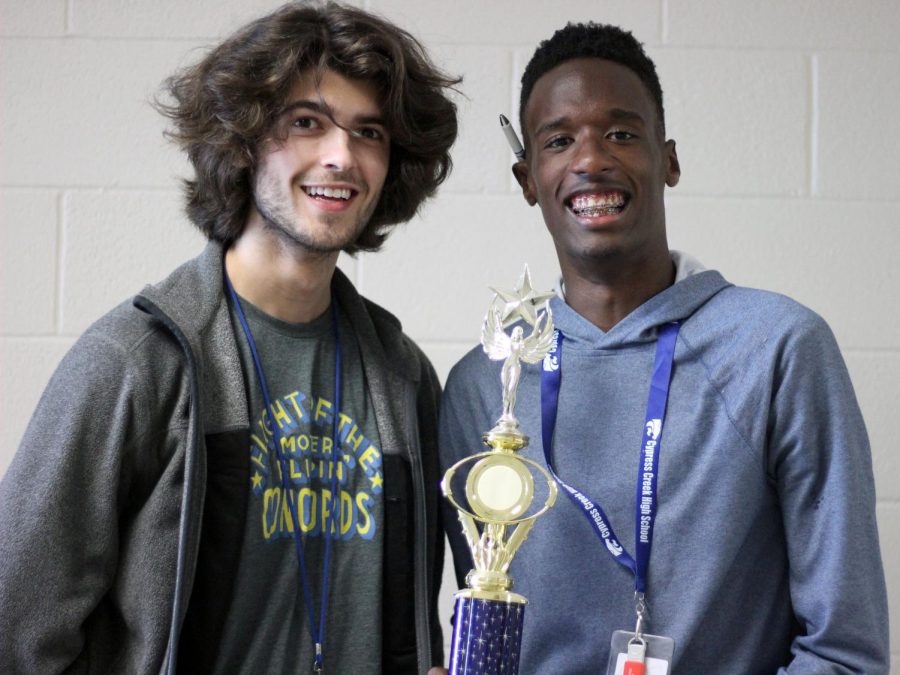 The warm lights dim as the murmurs of an anxious crowd fade into the silence of anticipation. Dozens of artists fidget in their seats, restlessly awaiting the beginning of the showings. A black Sedan pulls into view on the screen of the theater; it has begun.

Collin Smith has branded himself as a sort of “Renaissance Man” of a student here at Creek. He has founded and currently holds the title of president of not only the Mental Health Alliance but the Film Club as well, and almost everyone who knows him knows about his videos. Whether it be mini-documentaries for school or aloof sketches just for fun, Collin has made videos for years.

Collin Smith and Evan Harris, Film Club President and Vice President respectively, entered the Houston chapter of the 48 Hour Film Project (48HP), and took home 11 awards for their short film “ Ryan Dutsch is a Murderer (Not Clickbait)”, including first place for Best Film.

“We won the audience award because 15 of us showed up and voted our film as first place,” Smith said. “We didn’t expect to win anything else but there were 19 awards given and we won first place in 11 of them.”

The entire team, made up of both current and former Cy Creek students competing under the name “North Avenue”,felt beyond astonished at the results of the competition.

“I personally feel that it was divine intervention of some sort for us to have won as much as we did,” Smith said. “This was our first time going up against experienced adults that have done it before. I think it blew everybody’s minds.”

Collin first discovered the 48HFP through 14 Pews Documentary Workshop from an instructor who also planned on competing in the project.

“I did this documentary camp at this place called fourteen pews which used to be a church that I assume ran out of church business that they turned into a movie theater,” Smith said. “The instructor talked about how she was gonna do the project as well so I looked it up and I figured, ya know, why not?”

After deciding that he wanted to partake in the 48HFP, Smith gathered a group of friends he knew would take interest.

“ I worked as the team leader for our project and I assembled some kids that I knew from band and theater and film club and put them all into one group and we got a little thing going” Smith said.

Though Smith has created dozens of films in the past both for entertainment and for creative experimentation, the 48HFP presented him with an entirely new experience.

“I’ve never been involved in a project like this before, this was my first competitive short film that I’ve ever made and the first festival that I’ve ever been a part of,” Smith said. “I’ve only ever shown things in a classroom setting so it was really weird because we were in the theater almost, and I was seeing my face on a big screen and in front of a bunch of strangers.”

Not only was it the first competitive short film that Smith involved in, as one can infer from the name of the project, the group also had to operate under an immense time limitation. The 48HFP released the criteria for the short film and all groups who wished to participate had 48 hours to write, shoot, edit and submit their beloved creation.

“We wrote the first night, it took us about 6 hours, all ten of us wrote together as a group,” Smith said. “Then we started [shooting] little pieces one-by-one.”

The project posed fairly strong competition, with 36 total films submitted in the allotted 48 hours. The members of North Avenue, along with several supporters, attended an event showcasing and debuting the aforementioned short films.

Although Smith had previously created dozens of films under various circumstances, this project allowed him to push himself in a way he never had before.

“I think in total I ended up staying up 39 hours before I finally crashed,” Smith said. “Nick Hernandez, who was the pizza guy in the short film literally fell asleep with his face on the shotgun prop sitting up straight against the wall, tennis balls and string in his hands. It was very taxing energy-wise but it was a very rewarding experience.”

The process of making the film, though mentally and physically demanding, pushed the team to their creative limits. Through the extremely challenging criteria of the project, groups found themselves pushed to their absolute maximum. Some groups, including North Avenue, even felt that they preferred the limitations put on the project.

“I think it probably was more beneficial in a sense because I’ve really never known any other way to make films. They’ve always been done within a day or two days and edited up until four in the morning and turned into school the next day,” Smith said. “It was nothing I wasn’t entirely used to, just a lot more went into this one production-wise, in terms of editing, and sound design and set design.”

After winning the Houston chapter of the 48HFP, “Ryan Dutsch is a Murderer (Not Clickbait)” will advance to Filmapalooza 2020 in Rotterdam, Netherlands against the winners in the other 149 cities that participated in the project, as well as others competing in the festival.

“If we place in the top twelve then it’s going to the Cannes Film Festival later that year which is one of the biggest film festivals ever,” Smith said. “Again, I don’t really know how we won, it was like divine intervention.”

To watch their short film, click the following link: https://www.48hourfilm.com/en/houston-tx/films/37603