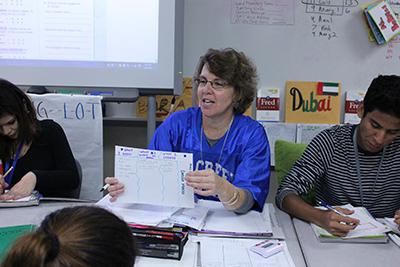 What is a FRED?

In order to motivate students and teachers to support each other and appreciate all the work being done, Read 180 teacher Andrea Barnes created the FRED Award last year.

Nominating students for the FRED Award requires a voting process. Every Friday teachers ask their students who was a “FRED” that week; students would recommend other classmates and a vote for the top FRED that week would take place. The nominee’s name and a one-word descriptor go on the large banner in front of the library.

“I want people to see that they can make a difference with just a kind word,” Barnes said. “It doesn’t take a lot of work, just saying a kind word, doing a kind thing.”

For students to get nominated for the FRED Award, they must show good character qualities like helping a classmate or being nice to another person.

“It is philosophy. It can really change lives,” Barnes said. “In this case you really are congratulating the kids that go above and beyond, so you don’t have to be a fantastic athlete or a theatre arts major or a choir singer or band member; you are just a regular person that is extraordinary with the gifts you have.”

The FRED Award got its name after the book “The FRED Factor” by Mark Sanborn, about an ordinary mailman that excels at his work and goes above and beyond in the community. Sanborn said the award will raise the importance of service and will praise people who already contain the qualities of a “FRED.” 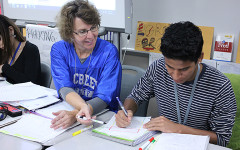 'Today will be a good day'

“[The FRED Award] is a terrific idea being done by many schools and organizations already,” Sanborn said. “Nominees should exemplify the spirit of FRED and be nominated by teachers and students.”

Barnes said she wanted to expand that philosophy past Cy Creek and to all the schools in the district. Other teachers and administrators like Mary Ann Guidry, also a winner of the FRED Award, believe expanding the FRED theory would better the CFISD community.

“I think [expanding the FRED Award] would be a great opportunity for all of us to just be a kinder gentler people,” Guidry said. “The FRED award is helping one another and I think anytime you’re doing that you’re moving in the right direction.”

This year Barnes expanded on the FRED Award and called it FRED 2.0, meaning faculty and staff now have the ability to earn the award.

“Teachers spend so much time with our students,” Guidry said. “We all learn from examples of what we see and what we hear.”

In order to fund the FRED Award, Barnes participated in the Classroom Champs Kroger Houston Dynamo challenge. After winning the challenge she received a $250 grant to the school and a Kroger gift card, which she also donated to pay for the prizes for the FRED Award.

“One of my colleagues nominated me for that Houston Dynamo Kroger challenge because I know if you won you get money, and I needed to win because I needed money to get prizes,” Barnes said. “Since I won the award I opened up the enjoyment [of naming a FRED Award winner] to every friday.”

Even though the FRED Award got a lot more hype with the start of the school year, Barnes said more work needs to be done to make sure students and teachers participate.
“People don’t want to take the time to write a note even though it only takes 5 minutes,” Barnes said. “I just want people to notice adults and students alike that we’re doing a good job, just a little pat on the back.”

‘Today will be a good day’