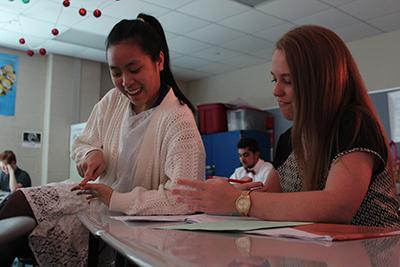 Tick, tick, tick. The clock inches forward. Every second passes agonizingly slowly. Her pen continues to move across the page.

For this exhausted student, midnight cannot come fast enough. At that crucial hour, she can abandon her responsibilities. At last, she can put away her homework for the night and begin preparing for bed. Despite her relief, she knows she will not get eight full hours’ sleep.

“The most rewarding thing, I feel like, is when you take the test and then in June and July, you get your score back and you’re like, ‘Yes. I passed. I don’t have to take this class anymore,’” Tang said.

Tang’s heavy workload lead her to leave Key Club, leaving Peer 2 Peer as her only extracurricular. Leaving Key Club didn’t devastate her, however.

Tang gets her work done on time, but at the expense of her sleep. Tang generally gets from four to six hours of sleep a night. Tang’s friend, senior Roshni Bhudia, said Tang often takes naps before starting her homework.

“She sleeps a lot when she comes home and then she tells the group chat at 9:30 ‘lol guys I just woke up,’” Bhudia said.

Tang’s former and current teachers all agree Tang stands out not just academically, but as a positive and bubbly personality. Street Law and World History teacher Sylvia Ford, who taught Tang in Human Geography AP, distinctly remembers her classroom presence.

Despite the amount of work she has, Tang maintains a positive outlook and attitude. Government teacher Nicole LeClaire said she has never seen Tang in a bad mood.

“A lot of you are on the down slope and done, you’re checked out, and she comes in every day like she just ate 55 candy bars and has a sugar high,” LeClaire said.

Tang plans to attend the University of Texas at Austin. She qualified for automatic admission.

“I really like how the campus is pretty big,” Tang said. “And I like it too cause I’ll be there with my sister and a lot of my friends are going and there’s new environment. I’m sick of all these people.”

Tang said she maintains a positive outlook and looks forward to the future.

“If I was in the future and looking back at myself now, I would be like, ‘Girl, why are you stressing out so much?’” Tang said. “Cause everyone’s going in the same ending point goal. And then everyone’s going to get there eventually, it’s just depending on how long.”