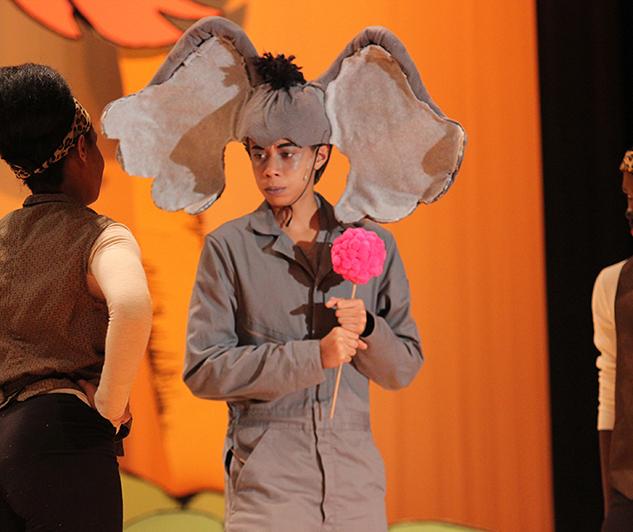 Horton hears a what?: Senior Brice Phillips performing on stage during a performance night of Seussical The Musical.

Stepping away from the piles of feathers that dust the floors backstage, director and theatre arts teacher Marilyn Ocker looks back at the six amazing nights “Seussical The Musical” lived in lights.

Beginning the production of the show only two days after the school year started, Ocker faced the wrath of auditions, clothes designers, fundraisers and even a few busy elementary “Whos from Whoville”.

“Musicals are what I like to call a necessary evil,” Ocker said. “They’re fun, but there’s so much to do.”

And even when things seemed like they couldn’t get any more busier for the theater kids, Ocker did the unthinkable: brought elementary children into the play.

“Having children in a play is one of those things you probably shouldn’t do, but I [thought] it was going to be fun,” Ocker said laughing.

Senior Brice Phillips, who played the role of Horton the Elephant, claims that downtime was rare in this musical.

“Everyone’s musical in this Seussical,” Phillips said. “Even if you weren’t the strongest singer or dancer, you still [had] to do it with style.”

Fitting the Bird Girls, the Whos and their town of Whoville all onto the tiny theater stage, Ocker and Phillips felt disappointment bite at them when they saw the audience attendance outcome.

“I put on a show that I think people will come and see and maybe one-tenth of our community came to see it,” Ocker said. “But it was worth the fun and experience for the theater kids because they’re not going to get this kind of responsibility anywhere else in the school and that’s what’s amazing.”

Washing the feathered Bird Girl outfits one last time, Ocker resumed her busy theater life by holding auditions for a new melodrama, “A Drift In New York,” that will premiere in January, and leaving the “nerdy” life of Dr. Seuss’s characters.

With the actors and actresses hard work, Ocker watched the show appreciatively from her spot in the back of theater, admiring the roles the young actors needed to work on and what needed to be applauded after the show.

“[Seussical] was probably the most stressful part of the entire year,” Phillips said. “But I wouldn’t change a thing.”