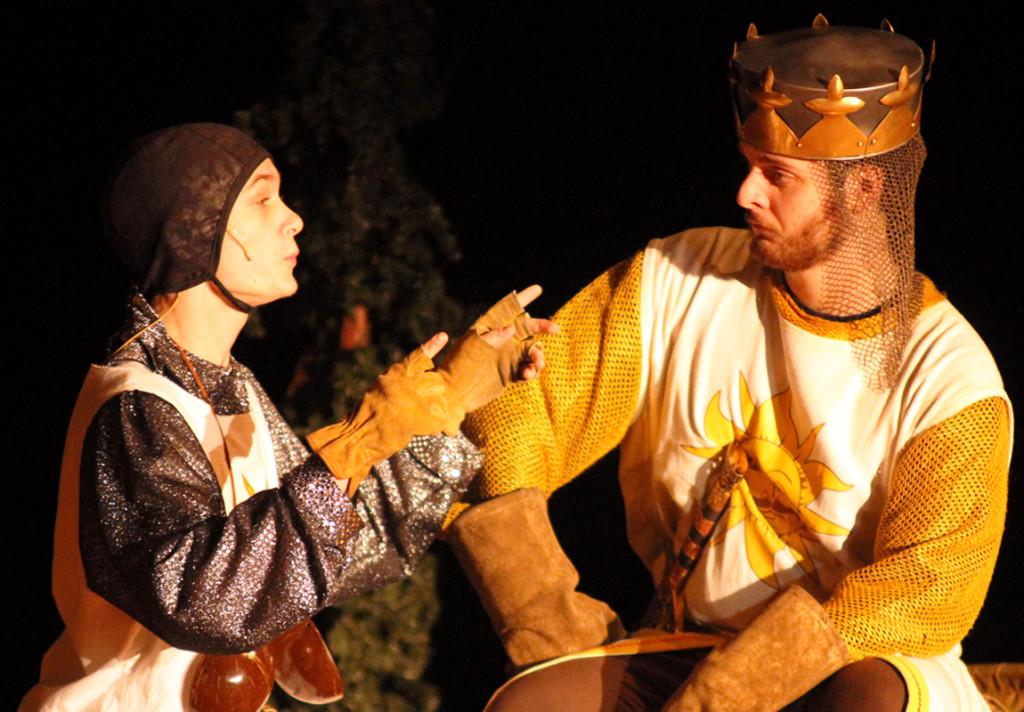 Beginning of a search: Junior Chad Dyer and Senior Ben Granger sing a song as they start their search for the Holy Grail. photo by Jenna Moreland

The packed auditorium became family as those who knew the late Marilyn Miller gathered to watch “Spamalot,” the musical for which she held off retirement.

A warm feeling spread over the audience on Saturday as some of Miller’s former students spoke briefly about the legacy she left behind.

“Our Saturday night performance is dedicated to her,” said senior Andi Dinehart, who played the Lady of the Lake.

On Main Street, a silent auction raised $2,000 for the Marilyn Miller Scholarship Fund.

“After Mrs. Miller passed, her family decided they didn’t want people to send a bunch of flowers, they just wanted something that would make Mrs. Miller proud so they decided to make this scholarship fund because it’s going to us as the students,” said senior Nathan Crooks, who played Sir Robin. “It’s going to the theater students at Creek who apply for it because they thought that’s what Mrs. Miller would want to help us carry on our dreams like she started.”

Before that night’s show, Theater Arts director Marilyn Ocker presented Miller’s family with a plaque that now hangs in the foyer of the theater. It includes Miller’s favorite quote, “The theater is magic, and there is magic in the theater.”

Miller, the theater director for 32 years, had delayed her retirement for the show. Last year, she announced that Cy Creek had become the first high school in the country to secure the rights to perform “Spamalot.”

After Miller died in August, the theater department wanted to carry on the show in her honor. After performing “The Crucible” last fall, the department started preparing for the comedic musical, based on the 1975 movie “Monty Python and the Holy Grail.”

“It’s really light-hearted, especially coming off ‘The Crucible,’ which was the most depressing, dark play ever,” Crooks said. “And now we just get to slap each other with fish and sing and dance around.”

Dinehart said she couldn’t believe it when she was cast as the Lady of the Lake.

“I totally looked up to all the girls in the leads [in previous plays] and never expected to be there. Now it’s like ‘Wow.’ It’s really big shoes to fill, but it’s fun,” she said. “I wanted to do my best and be in it and make it its best so I could make [Miller] proud. I wanted to do it for her.”

Junior Anna Barnes, who portrayed a one of the Lady of the Lake’s girls, said she, too, wanted to be a part of the musical to make Miller proud.

“Mrs. Miller was so excited for it,” Barnes said. “And when she passed away I knew everyone needed to come together as a family and put this on for her in her memory.”

Junior Chad Dyer, who played Patsy, King Arthur’s coconut-clomping servant, said his favorite thing about “Spamalot” was just being around the cast.

“The energy and the environment the cast had made was like my second home and I really enjoyed that,” Dyer said.

Theater Arts director Marilyn Ocker said she enjoyed the willingness of students who participated in “Spamalot” to do whatever it took take make the play its best.

Sometimes the humor wasn’t planned. Senior Ben Granger who played King Arthur, said when there was a mistake in a scene, he had to improvise.

“Saturday night we forgot to put the grail in the audience, at which point we discovered ‘The Grail was inside us and in Finland’ the whole time,” Granger said, referring to a skit that starts the musical. “Saves usually just come together in a fit of character and you honestly can’t remember what you said afterward.”

“Spamalot” wasn’t the last scholarship fundraiser. Ocker said she has decided to put on a one-woman show every year and the proceeds will go to the account.

“Sometime in April or May of the year when I don’t have any other shows going on, I’m gonna do something,” Ocker said.  “I’m gonna do it myself so there will always be money in the Marilyn Miller Scholarship Fund.”