A Night with Rex 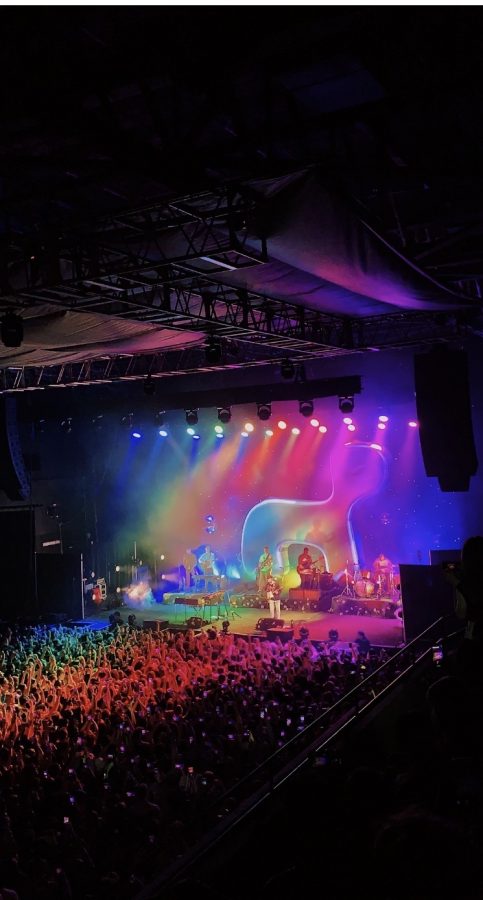 On Saturday evening February 22nd, Rex Orange County performed at the Revention Center in Houston,Texas. Rex treated everyone as his best friend as he took the cloud filled stage.

Based off of his new album “Pony”, the stage was set as a grassy floor with sunflowers sprinkled all around. A sky blue inviting backdrop accompanied the back of the stage with clouds spread sporadically throughout. Between the major audience involvement and the influx of rainbow colored lights, the concert was definitely one for the books.

The night opened with a performance of titled “10/10”, the first track on his new album. After finishing the introduction of the song by himself on the piano, the rest of his band walked onstage and were greeted with loud applause. Rex then continued out the song with frantic movements running across the stage and a display of orange and blue strobe lights.

After checking with the audience if everyone was enjoying themselves, Rex played his hit song “Never Enough” from his second album Apricot Princess. In contrast to the previous use of minimal lighting, the stage lit up with flashes of bright blue and green. Continuing the high energy, another song off of Apricot Princess titled “Television, So Far So Good” kept the cheerful mood ablaze. The song included delicate trumpet and saxophone solos that added nice underlying melodies to the song.

Another quick chat with the audience segued the concert back to songs from the Pony album. As the lights dimmed to a deep blue, Rex performed “Pluto Projector” a soft harmonic masterpiece that discussed the inevitability of growing old and becoming more mature in relationships. Then with a quick drop of the curtain, Rex was left on the stage with just himself and his keyboard. He started the personal segment with “ Every Way” an emotional piece about loving someone through their flaws.

After the series of slow, more heartfelt songs, Rex brought up the mood by playing the infamous song “Corduroy Dreams” off of his debut album “Bcos U Will Never B Free.” Initiating a call and response, Rex used the crowds energy to help boost the liveliness of the show. He then finished out the song with a remarkable whistle solo.

In a breathtaking transition, the curtains pulled away to reveal an entirely new stage that displayed lights in every color of the rainbow and a giant cartoon pony. Rex then transitioned to one of the more notable songs on his new album “Never Had the Balls” where in the guitar solo, multicolor strands of confetti shot out of two cannons on either side of the stage. The confetti created a magical effect while dropping on the members of the pit.

To finish out the concert, Rex performed the last track on Pony “It’s Not The Same Anymore” a reassuring song about growing in ones life and being content with change. Rex then thanked the crowd for the night and promised to return to Houston soon. After walking off stage, the audience began to chant all together, “One more song! One more song!” Rex walked back onstage and was greeted with a mass amount of applause. To finish out the night, Rex ended with “Always” as the choice for the encore. The song encapsules his feelings about suddenly becoming popular and how he “Will always be the way I always am.”