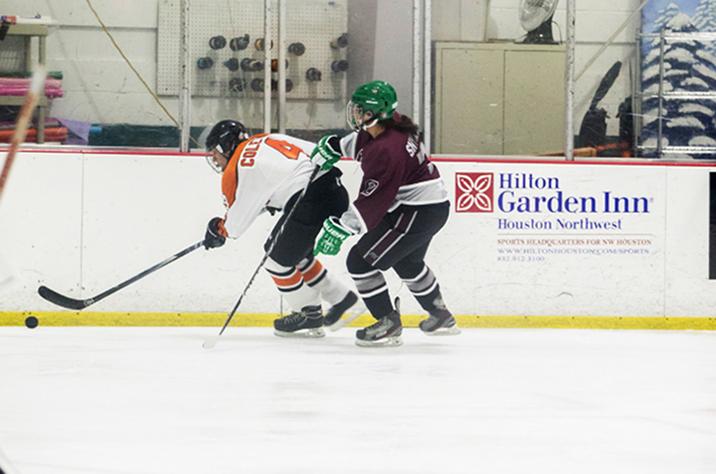 With the score tied and little remaining energy, sophomore Gail Snyder pulled in all her focus for the last minute of the game. When the puck was passed to her, she noticed a clear path to the net. She skated across the ice and took her shot with everything she had left. The puck flew. It whizzed past the defense man and soared straight over the goalie’s shoulder. The buzzer went off and the team went wild. She disappeared under her team’s dog pile as they celebrated the win.

Snyder plays for the Fair-Creek hockey team as the only female player and holds the position left wing and centerman.

“All of the guys are great friends and teammates,” Snyder said. “They go a little easy on me when it comes to hitting, thank God. I’m about half their height.”

Snyder started playing at the age of eight after being inspired in her hometown.

“I used to live in Colorado where hockey was a big thing,” she said. “I remember going to my local rink and watching the Colorado Avalanche practice. I was so amazed at the way they skated and instantly signed up for skating classes the next day.”

Pursuing her instant love for hockey, Snyder does not let her gender keep her from getting in the rink with the males.

“Hockey is definitely not the most popular sport here, and being a girl and playing hockey is even more rare,” she said. “As for any girl out there hoping to someday play, I would tell them there is no reason to be held back or scared.”

Even though the team accepts Snyder as a female player, she said it can still present some obstacles.

“Being a girl and playing in a male-dominated sport is honestly hard,” she said. “The other teams don’t go easy on you just because you’re a girl, and sometimes they even think they can take advantage of us.”

Snyder said she plans on continuing to play hockey once she gets out of high school.

Teammate and assistant captain junior Thomas Troutman said he completely supports having a girl play on the team with him.

Troutman said Snyder is an essential player for their team.

“Gail has the best positioning on the team,” he said. “She always knows where to be and when to be there. I can always count on her to be open for a pass, or cover me when I get out of position.”

Not only does Snyder play for the Fair-Creek hockey team but also for the all-girls Dallas Stars Elite team.

“We travel across the U.S. and Canada and play other Tier One [highest level] teams for a national title,” Snyder said. “So combined with high school hockey I’m at the rink probably six days a week.”

Snyder said she enjoys how the game has become a part of her life.

“It’s an exciting game, very physical and very fast paced,” she said. “There’s always so much adrenaline pumping whenever I play, from the puck drop to the final seconds of the game. Hockey is also one of the most competitive sports out there which is another reason why I love it so much.”