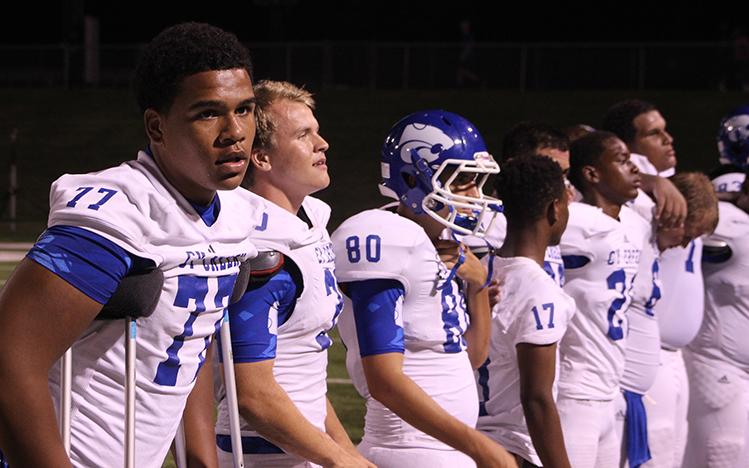 In June, Reed visited Boise State University to attend a summer football camp and received information which left him stunned but excited.

“While I was there they told me they were watching film on me a few months before I got up there,” Reed said.

After returning from camp, Reed received a direct message on Twitter from one of the coaches at BSU asking Reed to call them. That phone call brought news that he received a scholarship to play at Boise State University after only one year of high school football.

“It felt good because to be only 15 years old, and a sophomore. Already getting scholarship offers,” Reed said. “It felt really good because this is my dream.”

Reed intensified his workouts during the summer in order to bring his skills to a higher level for his new position on the varsity team.

“It was something that he needed to do to help him out athletically and he did it,” Coach Umana Essien said.

“I and Coach McCage helped the development of Grayson,” Essien said. “But Coach Scott Holloway has played a tremendous role in Grayson’s development and push towards academic excellence.”

Almost two months after receiving his scholarship in June, Reed’s future didn’t look so bright after tragedy struck in the scrimmage against West Side High School.

“I wasn’t really scared, I was just disappointed and sad,” Reed said. “I was sitting there getting iced while they were trying to figure out what was wrong with me, and my team was doing so good and I was just watching.”

During warm up, Reed tore his meniscus which left him facing surgery and long road of recovery ahead. His team would start the season without him.

“It affected the team tremendously because Grayson was going to be the starting left tackle,” Essien said. “It was a very sad moment for us and probably an even sadder moment for Grayson because he worked so hard over the summer at SAC camp.”

Reed said his friends, family and coaches supported him throughout his injury.

“My dad had some of my teammates come over and we sat down to talk about the injury and how my teammates and my family feel,” Reed said. ”They know I can play college football one day and they support me all the way.”

Reed said his mom and dad also supported him greatly not just throughout his injury, but they also help with his academics.

“Grayson’s parent are big advocates of academics and athletics,” Essien said. “Not everyone is lucky enough to have that but Grayson is.”

The help from his teammates, friends, coaches, and family put Reed’s road to recovery on the fast track for success.

“They think it’s a minor setback in a major comeback because they know what I am capable of and what I can do,” Reed said.