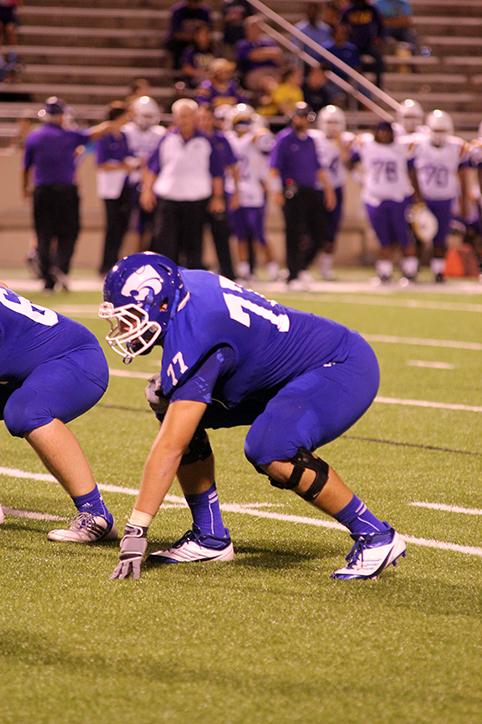 Counselors tell students to choose four schools they’d like to attend for college; a safety school, two matches, and one reach school.

“With all my offers, I just got a few of the schools that had the best programs and had the best school for engineering,” he said. “Colorado is top 25 in the nation for their engineering school. And I really liked their coaches a lot.”

He got his first piece of college mail during his sophomore year, and it only increased from there.

“But then junior year, after the football season, that’s when they started recruiting me a lot,” Rodriguez said. “At first, I started getting mail from a lot of different schools and then I got a call from Baylor and they had me come and visit their campus. I was really excited about that because I had never been invited to come see a campus before. After that, University of Colorado called me. They called me a few times. Then they finally offered me a scholarship to their school. They were the first ones to offer to me.”

Xfinity’s KUBE TV featured Rodriguez as their scholar athlete of the week during the first football game of the season against Klein Oak.

“I had to say, ‘I’m Cy Creek’s offense tackler, Elijah Rodriguez  I have a 3.5 GPA, I’m committed to the University of Colorado to be a mechanical engineer, and I’m proud to be Xfinity’s scholar athlete of the week’,” Rodriguez said. “But it was crazy, it took me so many times to say that. I wish someone had one of those markers from the movies when they say ‘take one’. I would have had 10 or 11 takes. It was still fun, I was laughing at myself”

Rodriguez did not always play for Creek though, in his freshman year he attended Cypress Christian School and played varsity football there.

“All my older brothers had gone there. [Cypress Christian School], “The brother right on top of me, he’s two years older than me, he was a senior and I was a freshman so I wanted to go to school with him for a year and be on the same football team as him,” he said. “Both of us got to be on varsity together, it was a lot of fun.”

When Rodriguez transferred to Creek his sophomore year, he made junior varsity, then moved up within a matter of weeks. Athletic coordinator and head football coach Greg McCaig said although it took Rodriguez a bit to get used to Creek’s way of playing, they got him to play at the highest level he could.

“He’s a good player,” McCaig said. “Our philosophy is to play our guys at the highest level they can play, regardless of their age.”

McCaig wishes Rodriguez best of luck playing college ball no matter what school he goes to and hopes he enjoys the experience.

“If he’s happy, I’m happy,” McCaig said. “If he decides to change schools, and decides to go to Bob’s budget barber college, I’ll be happy too as long as he’s happy and it’s gonna help his advances. I think he needs to enjoy it because it’s going to be over before you think. And then to understand that it’s a business. It’s not high school ball anymore.”

Rodriguez believes that all the team’s hard work will pay off throughout the season.

“I’m really excited, it feels great to be a senior,” he said. “It feels great cause this is my team. So far, we’ve just been doing so good. I was worried about it for a long time but we’ve been working really hard to be this good. I think we’re gonna have a good season. I don’t think I’m gonna have any regrets after this year.”