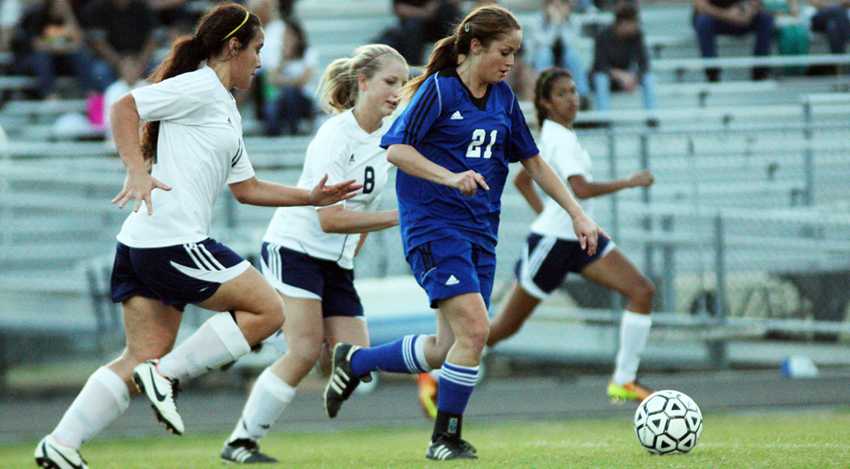 Goal bound: Junior Alisa Trejo handles the ball in the final district game against Cy Ranch. She ranks as the number two scorer in district. Photo by Dairyn Salguero

The girls’ varsity soccer team heads to playoffs today armed with the highest scorer in the district.

With junior Alisa Trejos’ key contribution to the offense, the team plays its bi-district playoff game against Alief Elsik High School at 5:30 p.m. at the Alief Auxiliary Stadium.

The girls finished third in district and are returning to the playoffs after falling short last year and breaking a 19-year streak.

Although Trejo leads with goals, she’s tied with two players from Cy-Fair point-wise, calculated by goals and assists.

“I have been in the top 10 in previous seasons, but I’ve never been this close,” she said.

Trejo ended up with 17 goals and three assists for the season. She said head coach Kathy Fling kept her posted on her stats throughout the season.

“I’m just happy that our team is in the playoffs and had a good season.”

Coming close to winning the title for the first time, Trejo said, added excitement to the games, along with new obstacles.

“I love having that extra drive to score and benefit my team offensively, but it puts a target on my back for fouls,” she said. “Teams have started fouling me everytime I get the ball. They don’t even go for the ball anymore.”

Trejo said most of her time goes to soccer, which she has played for 12 years.

“It really is my life.” Trejo said. “I play club soccer and Creek soccer, so I pretty much have soccer everyday.”

Fling said Trejo stays aggressive and she loves to see her succeed.

“She never stops, she always keeps going and gives 110 percent all the time, so I very seldom take her out of the game,” Fling said. “She’s the type of player you want 11 of on the field.”

But Fling said everyone is getting a piece of the action.

“About half of our team has scored this season, including all of our starters,” Fling said. “They are thrilled, usually we are a defensive-minded team, so we are just about happy with whoever scores.”

“It’s definitely something good for the team and for the school. It gives us a good name,” Buck said. “We want to support her.”

Trejo said her grandmother is also a huge driving force in her success.

“My grandma can’t come out to any of my games because she is sick and can’t walk around very well, but she loves keeping up with my stats, and never fails to let me know how proud she is of my success,” Trejo said. ”I don’t think I would be able to do it without her.”

Although her grandmother won’t be able to watch the play-off game, Trejo remains confident in herself and her team.

“I believe we are ready,” she said. “We worked hard to make it and we’ll work hard throughout the playoffs.”