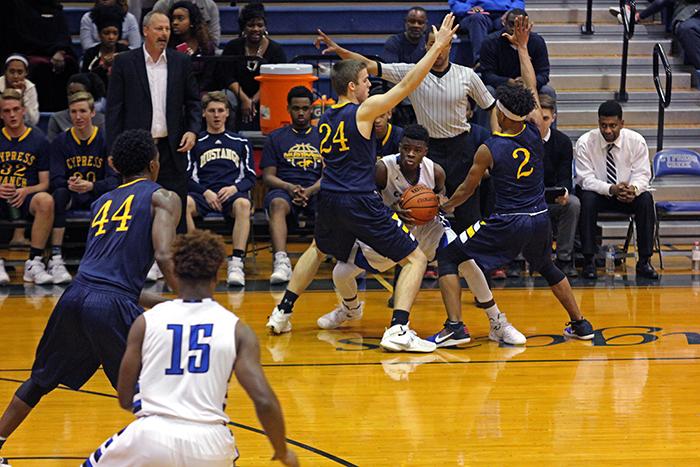 The Cypress Creek Basketball season of 2015-2016 had its share of up and downs. With an offseason built on turning potential and hard work into a promising season, the team was ready to prove themselves in real basketball games.

The team’s first game was against a Pearland team and they ended up losing 74-54. The game had few bright spots but it was good to get that loss out of the way early and build from it. Next up was the annual Dawghouse Invitational, a competitive tournament with teams all over the state. The team went 3-1 this tournament including a win over a state ranked Southlake Carroll team. Senior Cameron Ellis led the team in this game with 17 points including a go ahead three in the last five seconds of the game. This win helped the team gain confidence and momentum for the rest of the non-district schedule. Tough games against teams like Klein, Humble and Dekaney helped build the team’s confidence before the annual CFISD tournament which would put the Cougars against some of the toughest teams in the state.

The first game of the tournament was against a team from North Shore who had won the state championship in 2014. After winning most of the game, North Shore was able to come back and beat us by five. This game really showed us how good of a team we were and helped give us confidence for the rest of the tournament as we finished 2-2 beating two district opponents. By the end of out of district play we were a respectable 10-9 anticipating a stronger record for district play. 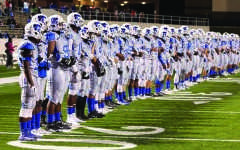 Game 1 of district play was against an up and down Cy Woods team at the Berry Center. This game was the start of a hopeful strong season and playoff run. The game was close the whole way but the team was able to pull it out by 2 points. This game coupled with a Jersey Village win made the team 2-0 which may not seem like much to most, but really put the team on the map around the district. The next game against falls was a true test for the team to show what we were made of. The game was as packed as the gym had been in a couple of years because everyone wanted to see just how good we were. Cy Falls came out firing and ended up beating us by 10. The lost spiraled into a three game losing streak with losses against Langham Creek and Cy Springs. Wins against Cy Ridge and Cy-Fair helped get the team back in the playoff race and from then on, every game was almost a must win. The team finished 3-3 from there with the losses coming against Cy Falls and state ranked Cy Ranch and Cy Lakes. The losses earlier in the season really hurt the team and we finished one spot out of the playoffs.

Although the team did not make the playoffs, we really helped turn the program around from the past years. The team will be led next season by Davon Berry, Alex Witherspoon, Mike Kayira, Alex Williams and Miles Battle.