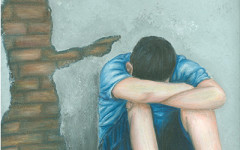 I tell myself this as I listen to my weekly treatment critique written by the staff members of the facility.

Past the racing thoughts that blossomed from the darkest crooks of my mind; past the uncanny urges to end my life for good.

I remember as I hear the three words I’ve been waiting for: Prepare for discharge.

It’s been fifteen weeks since I stepped through the doors of the unit that immediately became my home and since I first met the fifteen girls who soon became my family.

Each of those girls became part of me and changed my life for the better. They all somehow showed me that it was possible to live an improved life.

“I am living proof that things do get better,” a girl named Madison said to me during her goodbye group. “And one day you’ll be able to say the same.”

I’ve made it, I said to myself as I unlatched my suitcase handle from its socket, and gave my peers one last glance – one last smile. And then I was gone.

These columns were difficult to write.…That is an understatement.

There was a unique emotion at the end of each installment, and now that I’m finished with the series, I have no more words to say about the past eight months of my life.

The columns took place between December 2013 to May 2014. It’s been an entire year since I stepped inside that ambulance, and only eight months since I came home to my loving friends and family who were with me from beginning to end.

Life has been difficult. I’m not going to sugarcoat it, but life isn’t perfect after treatment. Recovery isn’t a one-time thing; it isn’t something you achieve, and then its  over. No, recovery is a life-long process – something that needs to be worked at every day. It sounds like hard work, and it truly is, but after a while it gets easier. It gets better. It really does.

After awhile, you get good at recovery. The coping skills take less effort when you feel like no one understands, nor can relate to what you’re going through. After so long, the problem-solving technique of “how to feel better” comes naturally and the burden of struggling to remember no longer comes.

I have not aced this skill. In fact, I think I’m barely halfway there. It doesn’t discourage me, but rather motivates me to strive to be stronger – to be better.

But… in reality, we’ve all made it. We’re all still here on this tiny world where everyone works to be a more superior version of themselves, and we’ve all survived the barriers and booby-traps that have knocked us down and scraped our knees. But despite these scars we all wear, no matter how we’ve received them, we see how they remind us of our inspiring strength for still being on this earth. How we’re still breathing, living, seeing, dreaming . . .

And that’s what we all need to remember.

Every forty seconds someone dies from committing suicide. I was almost one of them. Every single word of this column is true. It happened. I...

Caline “What are you here for?” I watched his oval fingernails tap in a small, dull melody on his tin table. This was the only sound in ...