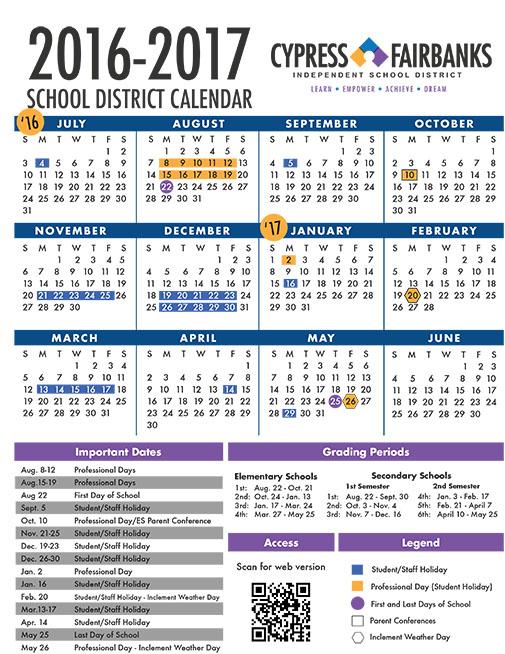 Photo by: Courtesy of CFISD

The CFISD Board of Trustees approved a new calendar and bell schedule for the 2016-2017 school year on Jan. 19. The changes, which include longer school days and a few different holidays, work to meet Texas legislative standards about the commencement of the school year and the amount of instruction provided to students.

The biggest change lies in the length of the school year. It will begin on Aug. 22, 2016 to abide by the House Bill 1 which states school cannot start before the fourth Monday of August.

The year will end on May 25, 2017, creating a total length of 173 days, four days shorter than this current year. The ability to shorten the school year comes from the adding of 15 minutes to the school day – five minutes at the beginning and ten minutes at the end – to meet state requirements now measuring school years by minutes rather than days. Principal Vicki Snokhous said she thinks the changes are a good thing.

“It will give students more time to receive instruction and learn concepts before taking EOC exams at the end of the year,” Snokhous said.

Snokhous also said increasing instructional minutes per day is positive, but she is not sure how it will affect the block schedule.

“We will have to work out some details and maybe adjust the time frame of the start of early release dates,” she said.

Other changes specific to Cy Creek include an earlier prom – May 13, 2017 – and earlier graduation. The new calendar and bell schedule also mean teachers will work the same amount of days, but students will have four days less of school.

U.S. Government teacher and varsity cheerleading coach Nicole LeClaire said the changes should not have much effect on her personal schedule and the classes she teaches, but she is not thrilled about the two weeks of professional inservice included in the new calendar.

“That seems excessive and is always my least favorite part of the school year,” LeClaire said.

AP English IV and SAT Prep teacher Leah Basconi said although teachers will have to plan for a shorter summer this year, she does not think classes will be affected much by the new schedule.

“I think it will be better to end school before Memorial Day, rather than break for the holiday and then return for final exams,” Basconi said.

Freshman Keiana Kreitz said she likes having the usual breaks, but she does not like that the school day ends later.

“It doesn’t really affect me; I just don’t get the point,” Kreitz said.

Sophomore Jaylon Dean said he is happy the school year will end earlier, and the extended bell schedule does not seem like a big deal to him.