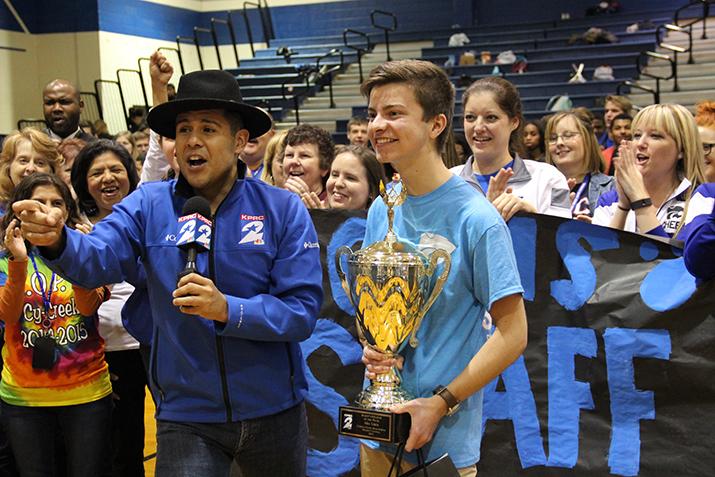 The gym was silent as students and teachers waited with bated breath. Band instruments were still and the air thick with anticipation to find out which student would be chosen as KPRC’s “Student of the Week.”

… “Alec Lintz,” and the room erupted with cheers.

At the 5 a.m. pep rally for KPRC, senior Alec Lintz received the “Student of the Week” honor for his spirit, involvement and support for the school. Lintz is a part of numerous school groups including National Honor Society (NHS) student leadership and is avidly involved in many of the school’s activities and events.

Grateful for the honor, Lintz said he had no idea he would be chosen.

“They said it was gonna be someone, like one of the top players in the school, so you know being StuCo president I didn’t think it was going to be me,” Lintz said. “I know there’s so many other people that were deserving of it, but I’m so surprised and thankful for it.”

“He deserves it, I mean,he’s one of the hardest working people I know,” Johnson said. “He’s involved in almost everything and he’s just an awesome guy.”

Johnson said Lintz receiving this honor shows a lot about not only Lintz but also the school.

With the help of district input and teacher recommendations, principal Sandy Trujillo nominated Lintz for “Student of the Week.”

“He’s involved in as much as he can be involved in, he’s so spirited, he doesn’t miss anything,” she said. “He really shows that character and spirit that everybody at school wants to have. Looking up in the stands, he’s swaying, he’s singing, he’s enjoying every moment of high school and thats what we want kids to do.”

After receiving his trophy Lintz took the opportunity to ask senior Blakely HIll, in front of everybody in the gym and everybody watching live at home, to go to prom with him.

“[The best part was] getting to ask Blakely and getting to be on TV most definitely, so I can show my family that doesn’t live in Houston,” Lintz said. “I was actually going make a poster and ask her in the background, but that didn’t happen so I figured I’ll just go ahead and ask her, so it was an in-the-moment thing and she said yes and everything worked out.”