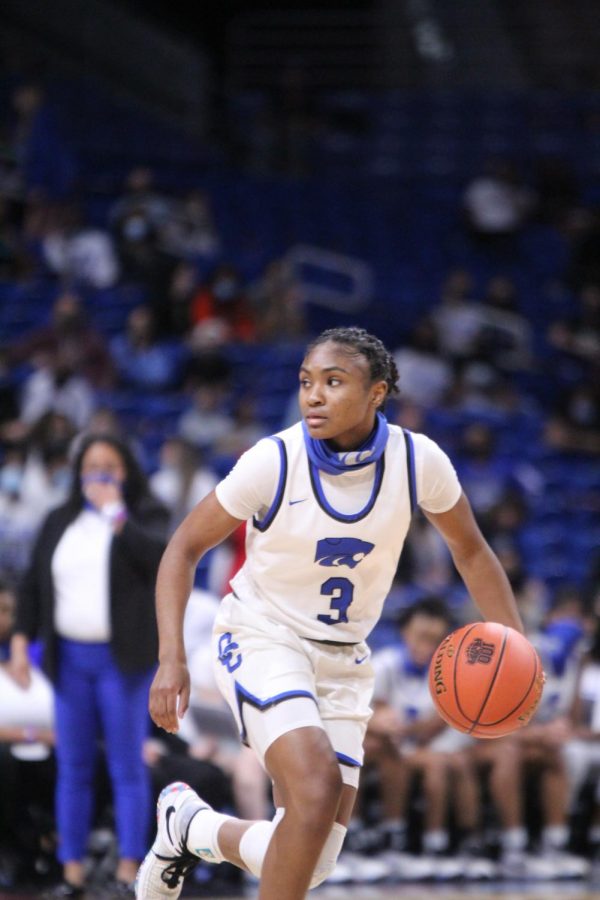 Every sports team is special, and the 2020-2021 Lady Cougars basketball team is no exception. With two McDonald’s All-Americans, making it to state championships, and only one game lost, this team is sure to leave a legacy at Cy Creek.
The Lady Cougars basketball season came to an end after losing the state championship to DeSoto High School 53-37 at the UIL Class 6A championship game in San Antonio at the Alamodome.
“We were so blessed to have the opportunity to play for another title this year. We were on a mission to finish the job. DeSoto was tough, talented competition and they just got the best of us that night,” Head Coach Jennifer Alexander said.
This was the team’s third time making it to state in four years. Cy Creek had reached the state semifinals in 2018 and made it to state last season, but fell short of Duncanville High School in the championship game.
“Obviously there was disappointment but we had to keep the bigger picture in mind of all that we have accomplished over the last four years. This senior class will go down as the winningest group in Cy Creek history and possibly Cy-Fair ISD history,” Head Coach Alexander said.
Creek met a similar fate this season, finishing with 32 out of 33 total games won with the only loss coming from the final state championship game. It seems as though the pressure put on our Lady Cougars by the championship got the better of them which led to them only scoring a total of 37 points, a fraction of the previous 50 plus point blowouts Creek had dealt out so many times before. This low score was reflected by the below average field goals made (FGM) and field goal percentage (FGP) displayed by Creek, making only 15 three pointers, giving them a 24 field goal percentage, compared the their average of 50 plus FGP in their other games
This combination of uncharacteristic shooting and defense by Creek is ultimately what led to the disappointing loss against DeSoto. In spite of having one less loss than Creek, DeSoto was very similar in total points scored and FGP for their entire season. Alongside the Lady Cougars, DeSoto was handing out 50 point blowouts all season long to their so called competitors, and left zero doubt in anyone mind that these two teams were the best in the state of Texas.
One thing that made this team particularly special was the fact that two of the players, Rori Harmon (12) and Kyndall Hunter (12), were selected for the prestigious McDonald’s All-American awards. Both are committed to the University of Texas at Austin and have shown that they are well deserving of this award through their amazing playing and leadership skills.
“It’s an honor to coach two McDonald’s All-Americans. Rori and Kyndall have changed the face of Cy Creek basketball forever. I’m just blessed to be a part of their journey that’s just getting started.” head coach Alexander said.
This team will undoubtedly leave a positive legacy at Creek, with their hard work and dedication. But Coach’s work is not done, and neither is the team. Next year’s team will further carry on the reputation of the Lady Cougars. As Alexander said, “Our five returners-Jasmyn Jackson, Trinity Santasiero, Krishawn Lee, Danielle Ruffin, and Amari Chambers will be a force. We have already said we’re not going anywhere. Creek will still be here.”