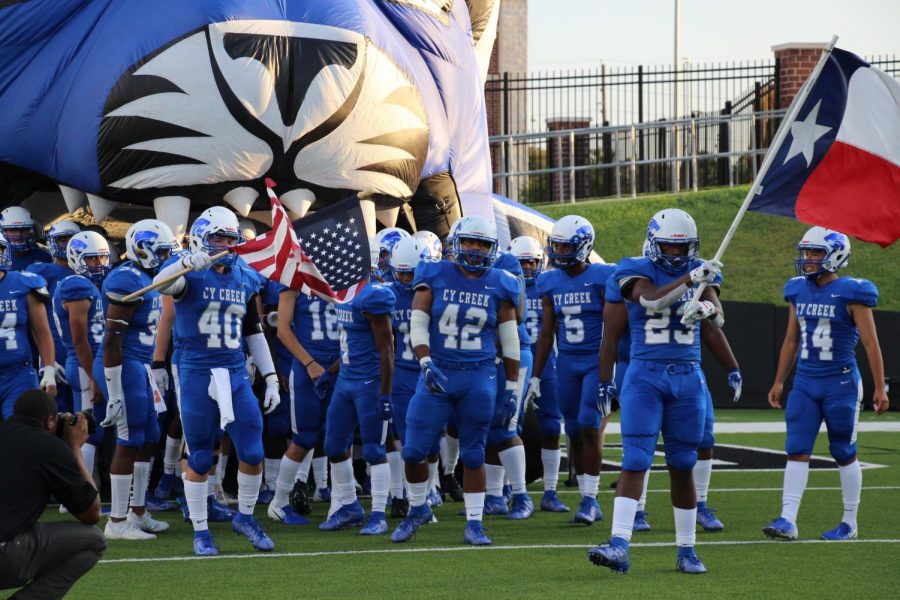 After months of speculation about the approval of the 2020-2021 sports seasons this year due to COVID-19, CFISD approved their plan in late July and left spectators wondering what was to come. Even though this year’s games look a lot different from last year, that cougar spirit still shines through as seen in last Saturday’s game.

Like any other year, the first game is often greeted with multiple emotions. However, this year many players are even more sentimental due to the almost lost season. When asked about feelings towards the season, Varsity player Anthony Rousseau (12) stated the football season is a big part of his high school career.

“It’s really meaningful to me because of all the emotions that we go through during the season,” said Rousseau.

Fellow teammate Thorben Wischmann (12) expressed his thoughts about being on varsity for the first time and his expectations for the upcoming season.

“I mean besides everybody being bigger and stronger, it’s not [much different], and it’s a lot more pressure, like it matters more [so] it feels good,” said Wischmann.

At the start of the first quarter, Klein High School took the lead, with Creek following close behind. Unfortunately, Creek was unable to catch up to Klein’s score of 14 points and by the end of the quarter, Creek was a touchdown behind.

By the second quarter, Creek scored a few times, but was still behind due to multiple flags on their plays. In the third quarter, both teams’ defenses were strong, keeping any team from scoring within the first six minutes. However, just before the end of the quarter, Klein picked up a touchdown leaving the score 31-21.

Despite not scoring in the previous quarter, Creek stepped up their game and got down to business. Only two minutes into the fourth quarter, both teams managed to secure a touchdown bringing the score up to 34-28 causing the tensions to rise. As the clock ticked down, the Bearkats picked up another touchdown leaving the Cougars with four minutes to play catch up.

The Cougars did not skip a beat, and answered with a pass from quarterback Brad Jackson (9) to wide receiver Brazos Galder (12) who then scored an astonishing 70-yard touchdown.  Although the game was close, Klein got the upper hand with an ending score of 48 to 35.

Even though the first game didn’t end in a win for Creek, this year’s season looks promising due to the success rate of previous seasons. According to Varsity Wires, Cypress Creek is predicted to be second in the region right behind Cy-Fair High School.

Creek’s next opponents are the Klein Cain Hurricanes scheduled for October 2, at the Klein Memorial Stadium. To follow along with the football season click here.