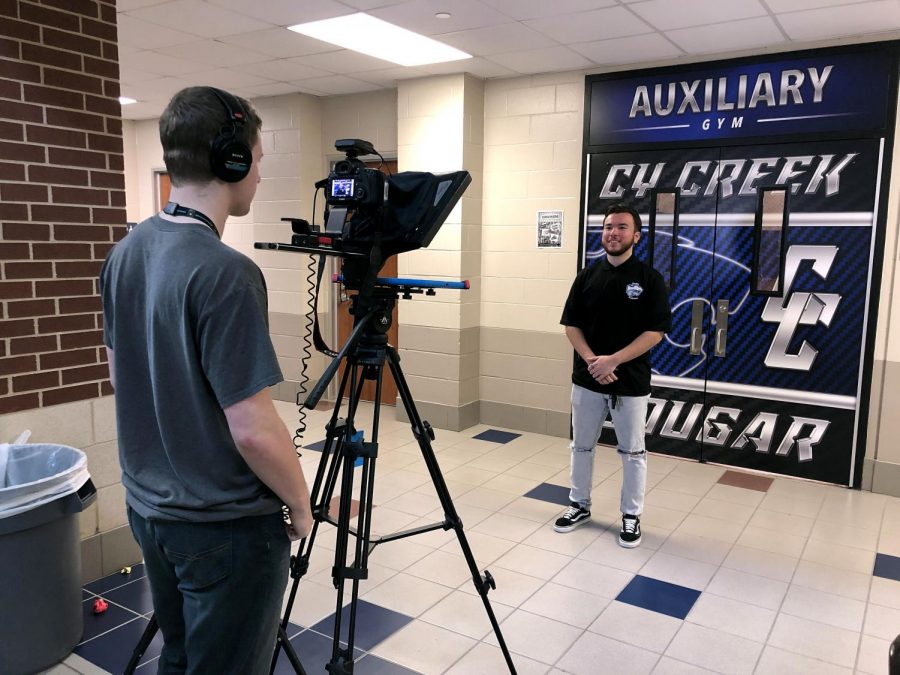 Creek’s Video Production team accomplished a huge achievement when both of their films were entered and accepted into UIL competition. Countless hours of effort worked into the making of these two videos as both teams worked hard to make it happen.

Waiting for results, Junior Sydney Johnson explains how she felt about her video, “What is Sparks”, making it into UIL.

“It was actually really cool because my partner, Linda, and I worked pretty hard on it.” Johnson said, “It was a really cool thing that we put time into because we got that far and we did not expect to go that far.”

The amount of thought put into these films prove why Sydney and her team’s video made it in over many other productions. Sydney explains how she and her team came up with the unique film.

“We were brainstorming and we wanted to do a video about things that were happening in the school,” Johnson said, “We were like ‘Oh! There’s a SPARKS program’. Someone tried to do a SPARKS video last year and it didn’t work out that well and we tried to make it a lot better and we learned a lot.”

Sydney and her team did learn a lot while spending time with the special needs kids.

“Whenever we filmed, we went into their class one day and the PALs kids were in there and they were playing UNO,” Johnson said. ”We filmed a bunch of that and they were having so much fun and enjoying themselves.”

The other video entered into the UIL competition was “A Number Far too Great” which senior Elvis Corona had the pleasure of working on.

“I feel proud of my group, my friends and my classmates I guess you could say,” Corona said. “We worked pretty hard on it. It took a long time to get it started. When we saw the finished product, we were proud and happy the way it turned out.”

With his video in semi-finals, Corona describes the central idea of his team’s video.

“One of our teachers, Coach Plummer, had a crawfish boil every year I think. All the benefits he would make from it go to veterans causes and things like that for PTSD,” Corona said. “We thought that was like, really cool so we wanted to make a documentary on veterans and how we can help them.”

Although Corona and his team’s video entered the UIL competition, they learned a lot from the video and experience, including everlasting life advice.

“Treat everybody with respect,” Corona said. “Don’t judge people, because you don’t know what they’ve been through. A lot of people go through stuff. You know, be kind, be open and be accepting.”