The new top dog in school 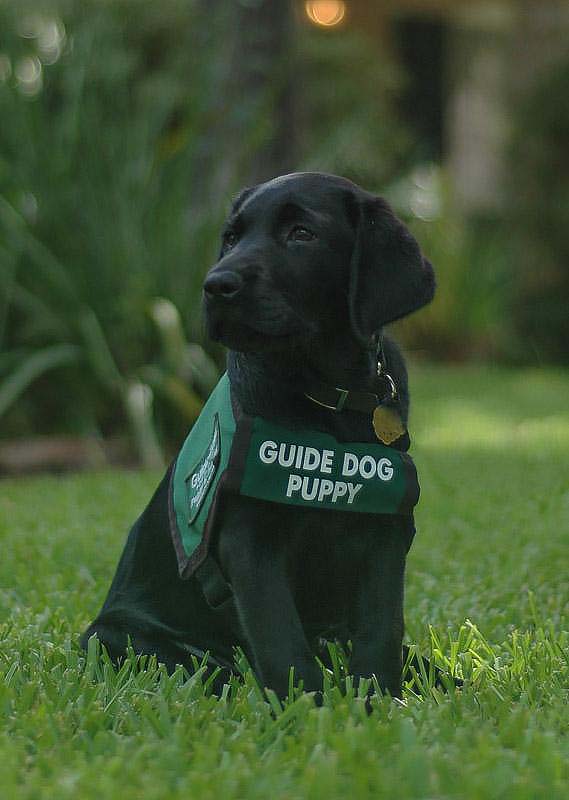 Crowds part for the new couple walking down the hall. People stare in awe and wonder, but must keep their distance from the new top dog in school.

As a Girl Scouts Gold Award project and FFA project senior Molly Meyer has taken on the responsibility of raising a black labrador puppy named Norwina, a future guide dog for the visually impaired. Meyer realized she wanted to raise a puppy for Lone Star Dog Raisers when she began collecting information from a friend participating in the organization.

“[At first] I thought [raising a puppy] was cool, and then I went to tour at Texas A&M and there was another lady there raising a dog, and I talked to her more [about it] and I fell in love with it and started the process to raise my own dog,” Meyer said.

Meyer’s project will come in multiple parts. First, she will present several presentations about her goals for the project as well as basic information about guide dogs to the school. Along with that, Meyer must not only care for Norwina, she also has to regularly attend meetings concerning Norwina’s training and the progress she has made.

Raising a future guide dog takes a lot of maturity and organization, a trainer must alter their schedule for the benefit of the dog and must plan their whole day around the puppy’s needs. Group Leader of the Houston Lone Star Guide Dog Raisers Dianne Kraxberger says she has high hopes for Meyer.

“It’s a huge responsibility. Sometimes I feel unworthy myself, of that responsibility. It’s 24/7, 365 days a year. Almost unlike anything else you volunteer for,” Kraxberger said. “It takes a lot of maturity to volunteer like this, and I find that Molly is a very mature young lady.”

When Meyer first received Norwina, she could not leave the puppy alone for long periods of time, which meant she spent most of her time at home with Norwina.

“When she was at home I just didn’t do anything; I just took care of her. Or if I did do anything it was for less than an hour,” Meyer said. “Sometimes we would be running errands and we would have to hit up Walmart, then go check on her, then hit up HEB, then go back to the house and check on her.”

However, Norwina has already made herself accustomed to leaving the house with Meyer. Even though she quickly tires while running errands, Meyer has successfully taken Norwina out on a regular basis. Meyer says having Norwina has barely affected her social life.

“I haven’t gone to the mall yet because that’s a little intense, but she’s done pretty good,” Meyer said. “Not messing up my social life too much but hopefully we can get her to football games and basketball games and volleyball, all the games so she can get used to a bunch of different types of environments because they’re all different.”

As part of her training, Norwina will follow Meyer throughout her school day. To start, she will stay in a crate in Mrs. Wisnowski’s classroom, but eventually Meyer will introduce her to the classroom environment until she gets accustomed to school to follow Meyer around all day.

“Visually impaired people are at every walk of life. They go to college, they go to high school, they’re teachers,” Kraxberger said. “It matures the dogs in a way; they are exposed to a situation they would not normally experience. I’m raising a puppy, and he doesn’t get this exposure.”

Meyer received Norwina at two months old. Once Norwina has reached between 15 and 17 months, she will travel back to either Oregon or California to continue her professional training as a guide dog for the visually impaired. Once Norwina has completed her professional training and has found a new family, Meyer will get the chance to see her “graduate” and walk across the stage into her new life.

“There is nothing like seeing your dog walk up there and meet this person that, she is literally going to change their life,” Kraxberger said. “I think Norwina will have a great year, and I look forward to seeing her walk across the stage at graduation.”

Not only will having Norwina around the school help Meyer complete her FFA and Girl Scout projects, Principal Vicki Snukhous sees having the puppy around as a learning experience for students and staff alike.

“[Lone Star Guide Dog Raisers] are very structured in what you have to do for these puppies, so not only do you have to have structure for the puppy but also for yourself,” Snukhous said. “For me, it’s very hard to not want to go pet the puppy and play with it. So you have to train the adults and kids as well as the dog.”

Meyer asks for help from the students in raising Norwina by not attempting to talk to or pet her, since she easily loses focus. Also, Meyer has not exposed Norwina to human food, so do not attempt to feed her. When Norwina sits in class, Meyer has trained Norwina to sit patiently and quietly.

One Response to “Meet Norwina”