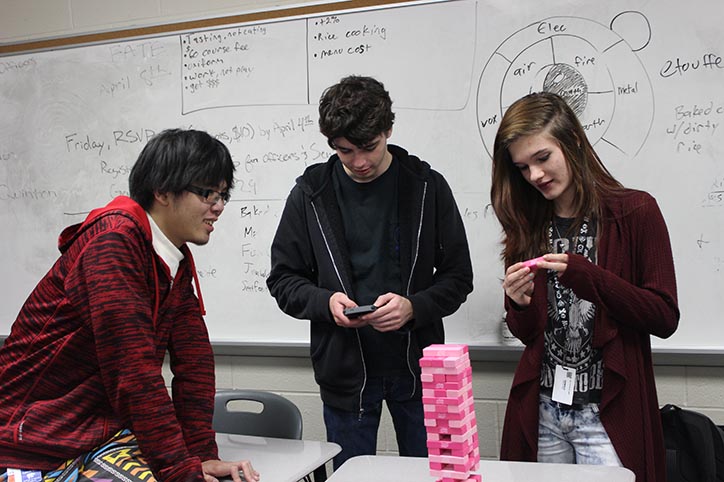 Game Club, an unofficial organization where students can socialize and play board and card games, meets every Monday and Friday after school in Culinary Arts teacher Patrick Smith’s classroom. Senior Sarah Garner serves as the club’s president.

“I really like board games, so it’s really nice to have a group of people that share that interest with me,” Garner said. “It’s nice to play games every week, just having that thing to look forward to.”

According to Garner, the club started out as a place for students to just play “Magic: the Gathering,” a fantasy card game.

“I had never played it before, and I went there to learn how to play it,” she said. “Then I brought in a different game, and everybody seemed to be really interested in that, so we all started bringing more games, and now that’s what we do. We just play anything that we bring in.”

“It seemed interesting,” Parmenter said. “It was different from other clubs, and it didn’t have many members, but I just liked games like this and wanted to join.”

Garner said she wants more students to come to the meetings so the club can run strong in years to come.

“It’s just really cool,” she said. “[My favorite thing is] probably the fact that we can bring in all these different things and that everybody is so willing to try all these new games. I hope it survives, and I hope they keep getting good groups like this.”