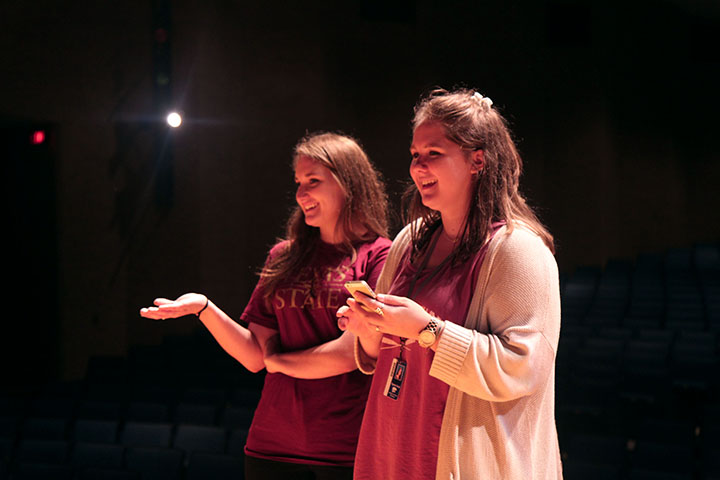 The pre-show jitters start to arrive as the senior directors rush to measure the stage, build the set and rehearse the play with the actors. They have waited four years to have their moment and soon their show will finally begin.

Seniors Samantha Sandacz and Kaci Jackson present their first play as directors, “The Bright Blue Mailbox Suicide Note” by Lindsay Price debuting on Oct. 7 at 3 p.m., ending in time for students to catch the late bus, and on Oct. 9 at 7 p.m.

After involving themselves in theater all four years of their high school career, both seniors will direct the play.

Members of theater since freshman year both Sandacz and Jackson have acted and worked on the theater crew, but has never directed.

“I am so excited to finally direct a play,” Sandacz said. “I have dreamed about this moment since I was in my first senior direct my freshman year. I’m also really excited to have everyone experience this show.”

The play conveys a delicate and serious matter in life: suicide. After looking through other previews for shows, Sandacz and Jackson said they chose this play because of that topic.

“[This play is] about something that teens sometimes don’t want to talk about,” Jackson said. “Coming to see it may help someone or someone they know.”

Both Sandacz and Jackson said they consider this play one of their favorites the theater program has done.

“It has a powerful message as well as being comedic at times,” Sandacz said. “I hope everyone gets something out of this show and hope to share more stories as time goes on.”

Although both the seniors said they feel excited to direct this play, Sandacz said she feels nervous about some of the tasks she faces as director.

“Having to be in charge of 11 actors,” she said. “That is a lot of people to control, and when they are your peers it’s even harder.”

Even with the challenges both directors face, Jackson said she feels grateful for this opportunity.

“Seeing something you envision in your head for so long finally come to life,” she said. “Getting the opportunity to finally use all the knowledge I’ve been accumulating for years now makes it all worth it.”

Jackson and Sandacz said they hope this play will reach out to others.

“This play could honestly change lives,” Sandacz said. “Maybe not yours, but someone in that audience will be changed by this show.”