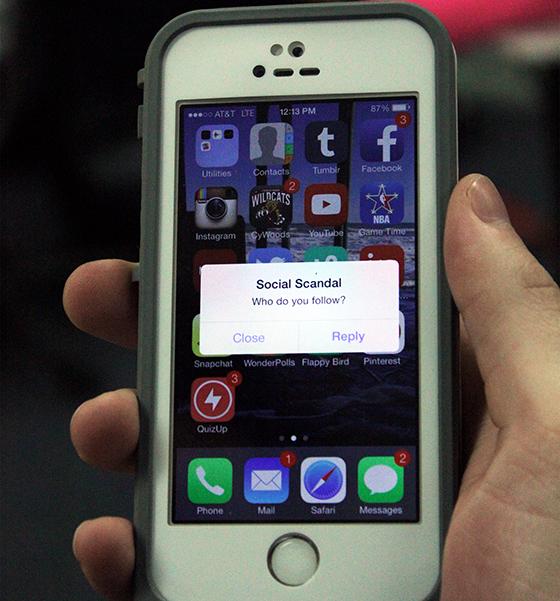 Friday night, a time when friends get together becomes a time when social media thrives. Instantly people share moments, take pictures and tweet about the night’s festivities.

In this generation, privacy on the internet has become a rare delicacy, leading to the question; does it exist anymore?

Snapchat, a smart-phone application, allows a person to send a picture to someone for a certain amount of time. According to the company, once all parties receive and view “snaps,” the image is deleted from all devices and Snapchat’s servers. The company does not guarantee a particular timeframe in which images are deleted.

Controversies and assumptions exist over the creation of Snapchat, including the one that the creators developed it as a “safe” way to send explicit pictures. The creators, Evan Spiegel and Robert Murphy, protest these rumors, but documents in the lawsuit between the creators and a former colleague claiming Snapchat was his idea reveal a different story according to some sources.  To read more about this go to https://www.adammclane.com/2013/08/22/why-you-should-delete-snapchat/.

Snapchat seems safe, but hackers accessed the popular app’s security system and released 4.6 million users’ account information early this year. Users can check to see if they were one of the millions affected by visiting http://lookup.gibsonsec.org/lookup.

Whether the snap is set to one second or 10, the opportunity to screenshot presents itself and then share it all over the Internet. Screen shotting is a feature possessed by most smart phones of capturing whatever is current on the device’s screen and saving the image to the phone’s memory.

Both a victim and offender of “screen-shotting,” senior Kevin Pedraza said people have screenshot him multiple times before.

“[Getting screenshot] is weird at first depending on the picture,”  Pedraza said. “Then I figured that it doesn’t really matter.”

Even though he feels screenshots don’t mean much, others do not favor their screenshot–frenzy friends.

“When someone takes a screenshot through Snapchat of my face, I lose trust in that person,” sophomore Efren Silva said.

“It’s just drama honestly,” senior Tyler Fiscella said. “Everyone does it just to follow what other people do, and they just cause drama.“

Even with an account set to private, the information posted is stored in many servers with a potential to be seen by anyone in the world.

“You’re going to have a friend who has you added that [people] can still see everything through them,” senior Caroline Hudson said.

Because of public accessibility, social media outlets became a tool used to expose and criticize people’s personal lives on the Internet. Statistics show that more than 25 percent of teenagers experience online bullying.

“[Online criticism] is worse online because people don’t think it means as much as it really does,” freshman Christian Alvarez said.

Sophomore Alexis Green sat at the dinner table with her family at her aunt’s house when she heard the beep of her phone. One new message.

“My friends just texted me like, ‘Have you seen this photo of you.’” Green said. “I just responded like ‘What are you talking about, what do you mean?”

Green’s friends contacted her about an explicit Instagram account which posted personal photos of underaged girls. The account exposed an intimate photo of a different girl  but identified the image as Green.

“I don’t even understand how that picture got out, or who it is,” she said. “I’ve never and will never send a nude. I just have no idea who could have done that, or did that to me.”

Another victim of the profile, sophomore Alexandra Zaghbour, said she trusted a photograph of herself to someone, only to find it reappear on the Instagram account.

“I am fully aware that I brought this upon myself,” she said. “I’ve just learned and continue to learn from my mistakes.”

The anonymous owners of the account opted for a private setting, but accepted users who gave the account a “shout out” or advertised them to gain more followers. Some of the accepted followers commented on and took screenshots of the girls’ photos which was how news of  the account’s existence spread through the school.

“I read most of them [comments] and I was really surprised, and mad,” a victim’s friend, sophomore Kassy Vivero said. “It was like no one had a heart.”

Klein High School found itself to be the target of a similar account recently. As reported in local media, the owners of the Instagram account for KHS now face legal actions from victims and their parents for creating and posting on the  account.