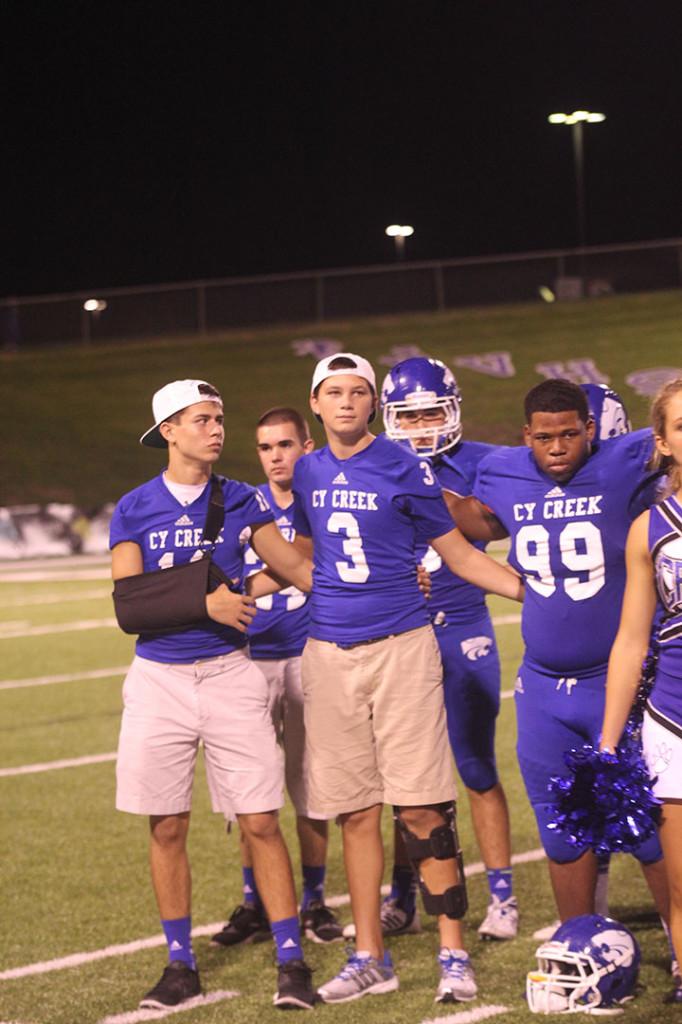 Every year athletes suffer critical injuries causing them to miss out on games, or worse, the entire season.

‘Stay positive and just be there for everybody’

Senior Tyler Huff played a variety of positions in football since first grade, until seventh grade deciding to only play wide receiver. Mid-season of Huff’s junior year on the junior varsity football team, he was reassigned as a backup receiver for varsity.

“[Tyler] played on varsity last year and we were counting on him to triumph this year,” head football coach Greg McCaig said.

During summer practice, Huff tore his medial collateral ligament and shredded his meniscus, having to miss out on his senior year as a varsity football player.

“I caught a pass and I was running and he just tackled me and twisted me and hit my leg from the outside and then it buckled on the inside,” he said.

Huff said his injury was very serious and calls his new position on the team injury reserved. At games he sometimes helps the players stretch.

“I’m just like ‘Stay positive and just be there for everybody’,’” he said. “I just do whatever they need me to do.”

Having played running back since third grade and getting moved up to quarterback freshman year was a huge transition for junior Brett Baumgartner.

Baumgartner, injured at a home game against Cy Falls, and did not play for the next four games.

“I was running on the sideline and I got hit on my right side and I landed on my left side and landed right on [my collarbone],” Baumgartner said.

Because of Baumgartner’s injury, junior Ross Hargrove, had to step in as the starting quarterback.

“It’s a lot more responsibility and you got to try a lot harder,” Hargrove said.

Also, sophomore Luke Allen moved up from junior varsity as a backup quarterback to the varsity team.

“The environment and the level of speed is just a lot faster, but other than that it’s really fun being out there,” Allen said.

‘I love the game, so I don’t really wanna give it up’

Having played various positions for various teams other than Creek’s throughout the years, senior Donovan Williams has to miss out on his last year as a high school football player.

Williams injured himself at the first football game of the season against Klein Oak.

“I was running down on a kickoff and I fractured my foot,” Williams said. “I felt like, my knee just gave out and later I found out it was a torn [anterior cruciate ligament].”

Williams will not be back for the season, something he’s worked really hard for.

At the friday homecoming game against Jersey Village High School, Williams had the opportunity to get into uniform and run with his teammates one last time.

“I’m happy that I got to dress out one more time before surgery,” WIlliams said. “I truly appreciated them letting me run.”

‘I kind of take more of a coaching view’

Senior Blake Cole played for six years until an injury refrained him from playing on the varsity football team his senior year.

“I had already broken my collarbone over the summer so it hadn’t healed completely when I got tackled at practice,” Cole said.

Having to miss out on his senior year of football was pretty hard on Cole.

“It kinda sucked, actually it really sucked, not being able to play and seeing all my friends get out there and stuff.” Cole said.

Because of the injury Cole gained a new position on the team.

“I kind of take more of a coaching view,” Cole said. “I’m watching the plays and telling them what they can fix, stuff like that.”

McCaig was disappointed over the fact that his players had to miss out on the games and the season.

“You have to be prepared for injuries,” McCaig said. “Then you have to prepare your team to deal with the consequences of the injuries.”