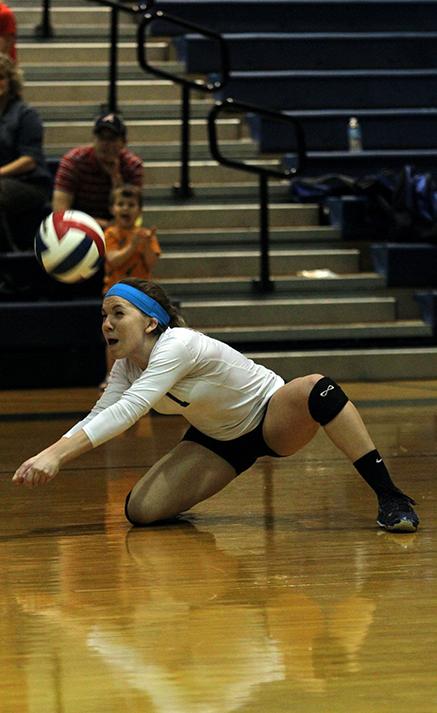 On the day of a game, varsity volleyball player Payton Brown gets her adrenaline going by thinking and praying, and when the time for her to step onto the court she’s ready to work hard.

Brown credits her relationship with God and strong commitment as what keeps her striving for the top.

Playing as the team’s libero Brown acts as the offense’s eyes on the court to help tell them where to hit.

“I am the defensive captain and sparkplug like every other libero,” Brown said. “Liberos are responsible for the backrow and making sure the team is excited, intense and aggressive during the game.”

Born deaf and having to wear implants, Brown does not let it affect her on the court.

“Off the court, it was always a struggle to fit in socially,” she said. “Not saying that I wasn’t socially developed, but it was always hard having to be different from other kids.”

Though Brown has overcome many obstacles that face her with her disability, but she would never wish for any kid to have to grow up like that.

“It caused a lot of frustration over time, and it was just difficult,” Brown said.

Overcoming obstacles has gotten Brown several honorable mentions for her success on the court including Honda Athlete of the week and this past summer where she played on the National volleyball Team in Sofia, Bulgaria.

“It was an incredible honor to represent the USA and get the opportunity to play among some of the best deaf athletes in the world,” Brown said. “It was awesome to get to play with my Team USA teammates and learn from them about their experiences in volleyball and life.”

Varsity volleyball coach Tami Combs said not many kids receive the kind of exposure Brown has.

“Payton is a valuable part to the team because of her experience,” Combs said. “Her experience out of the country has been big for our success here at Creek. “

“She always plays hard, and she always goes for everything,” Lindsey said. “She doesn’t give up and she’s very energetic- she’s a really good defensive player.”

Combs said Payton can make the game look very easy to those not knowledgeable about volleyball.

“Payton is quick and able to read the ball very well,” Combs said. “Payton just seems to always be at the right place at the right time, because she can read what the offense of the other team is going to do before they hit and move quickly enough to the spot for a perfect pass. “

Brown said the opportunities and awards represent how far God has brought her in life.

“It was a truly humbling experience, and it was exhilarating too,” she said. “I just feel so blessed that God allowed me to receive the honor.”

Though Brown enjoys the recognition she’s received, volleyball has also taught her life lessons. She said God remains a force that keeps Brown playing and striving to do better.

“Playing volleyball has really done a lot for my life,” Brown said. “It’s helped me have a closer relationship with God, get a better perspective on life,and I know that anything is possible with hard work despite any circumstances.”

Brown credits her teammates for the success she’s had, and looks forward to the season ahead.

“I certainly wouldn’t have been honored if I didn’t have great coaches and teammates,” Brown said. “Volleyball has also taught me that you need to trust people because it truly takes a team to be the best.”

With her parents and grandparents supporting her on the sidelines, Brown said she will continue to play volleyball in the future.

“I have developed a passion for volleyball over the years,” she said. “I also love the competition and play for the love of the game, it reminds me that I can achieve my dreams by working hard.”