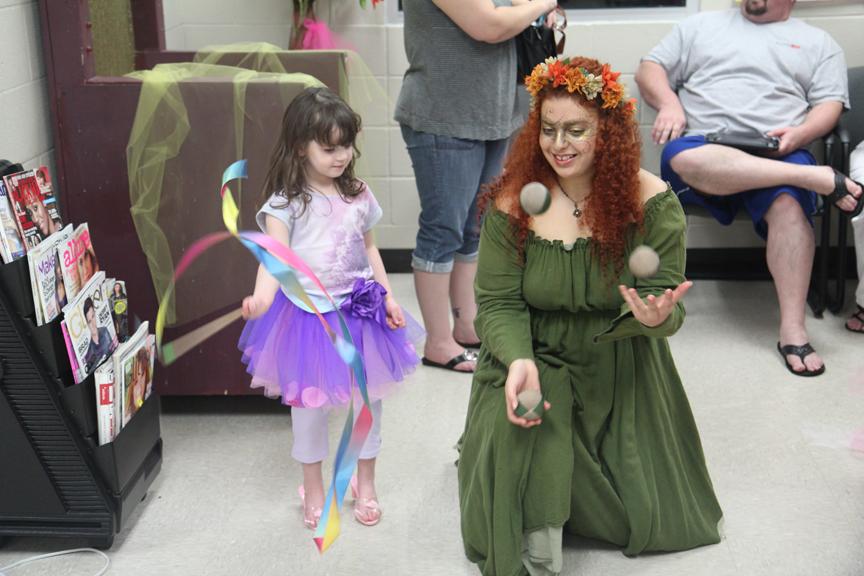 Juggling: Senior Andrea Serving juggles for the campus guests on cosmetology’s Princess for the Day fundraiser. Photo by Amber Harris

A court jester dressed in green danced, juggled and twirled ribbons before a roomful of princesses on Saturday.

Little girls wearing costumes entered the cosmetology room, full of mirrors and glitter, to received a makeover from the students. Their jester, senior Andrea Servin, entertained them during their pampering session.

“It’s not just for the kids, it’s for the adults, they really enjoy it,” Servin said. “It brings me a good feeling to bring joy to others.”

She’s used to performing in front of others because of her job at Texas Renaissance festival. The medieval experience attracted her right off the axe.

After attending the festival in 2009, Servin decided to go back the following year. She was inspired by  Clan Tynker, a group that started in New Mexico and spends its time on medieval topics, magic and juggling at the festival.  Servin serves as a garland girl who sells crowns made of flowers.

“They have done a really good job with magic and juggling and I just thought, ‘What am I waiting for, I should work here,’” Servin said. “The Clan Tynker were the ones to inspire me and because of them I started to work on the Renaissance Festival.”

Servin said the hardest part of her job is being on her feet all weekend.

“I have to stand 12 hours on Saturdays and then another 12 hours on Sundays, and I only have 20 minutes of lunch,” she said. “The best part is that you get to meet cool people … amazing people that can teach you so much.”

Servin whose native language is Spanish, said employees are encouraged to use an Elizabethan English accent.

“The accent is not really necessary so if you don’t wish to use it you can speak normally, but there [are] certain phrases that you always use such as ‘My lord’ and ‘My lady,’ she said.

Servin said she wants people to have a nice time, but some festival-goers, such as drunk adults, can make workers or other visitors uncomfortable.

“When somebody is bothering us, we can go to the nearest radio station and call security,” Servin said. “There are 40,000 to 60,000 people who want to enjoy the festival every weekend, and we want them to have fun.”

The festival has a dress code for the employees. Their costumes must connect with their position. For example, if an employee is a pirate, he or she cannot dress as a knight or a fairy.

“We have to wear something that has to do with the festival,” Servin said. “We can bring our own costumes or buy them, but it has to be from the same era.”

Servin says she has a great time working at the festival and considers that the most important part of her job.

“I have an amazing time being myself and making other people happy with what I do,” she said. “Like for example whenever little girls want a flower crown, but the parents have no money or they just pass by I give them a flower, and that makes them happy, and it makes me happy and that is important to me.”

“She attracts a lot of people doing what she likes to do like juggling and selling flower crowns,” Juka said. “She is very outgoing with everyone.”

Servin said she’s not sure whether she’ll continue working at the festival.

“After high school I would like to stay, but I still don’t know where I am going,” she said. “If I get to stay in Houston I would like to change my position at the festival. I would like to be a jester this time and not a garden girl and stand there for 12 hours.”

Servin said she also enjoys activities such as sports and art.

“I love soccer, I’m a great fanatic of it,” she said. “I also like to paint, but mostly everything seems related to the Renaissance. “