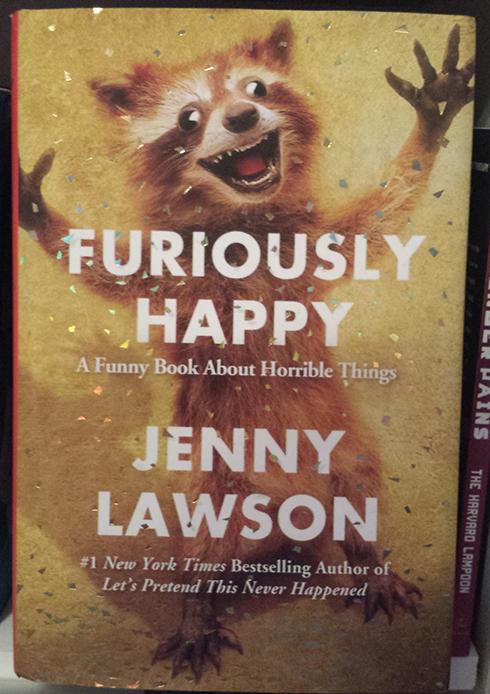 Once I began reading this novel I became absorbed in Jenny Lawson’s stories. She took me on a twisted, hilarious, miserable, furiously happy trip that I enjoyed the whole time.

“Furiously Happy” follows Lawson through her life of battling her mental illness. The reader got to witness more sides of her than most people would normally care to share, and – to put it in Lawson’s words – the novel “is a collection of bizarre essays and conversations and confused thoughts stuck together by spilled boxed wine and the frustrated tears of baffled editors who have no choice but to accept [her] belief that it’s perfectly acceptable to make up something if you need a word that doesn’t already exist, and that punctuation is more of a suggestion than a law.”

Reading that small quote only offered a little glimpse into what sort of writing style and attitude Lawson has and became all I needed to become completely engrossed in the novel. The author uses her carefree tone to go beyond just lecturing the reader, she breaks the fourth wall and comforts the reader by putting a funny twist on some of the most terrifyingly unimaginable events in her life. She embraces the weirdness about herself and helps the reader understand that everyone “is strange, funny, honest, and more than a little bit peculiar. But in the best way possible.”

Throughout the novel, I realized Lawson chose to take pride and really allow the reader to get the know her, unlike other writers who create and alternate persona in their writing. After looking into some interviews and taking a glimpse at her other novel, it became clear Lawson did not just want to write about her life, but she wanted to share it and make sure people knew they not alone in the world. Lawson sought out to make people feel like they belonged and to teach everyone “one simple but confusing truth: Even when everything’s going your way, you can still be sad. Or anxious. Or uncomfortably numb. Because you can’t always control your brain or your emotions, even when things are perfect.”
Overall, I would recommend this book to anyone searching for a giggle, looking to learn about mental illness or just wants to follow Lawson’s powerful lead and learn to “be unapologetically, incurably, furiously happy.”