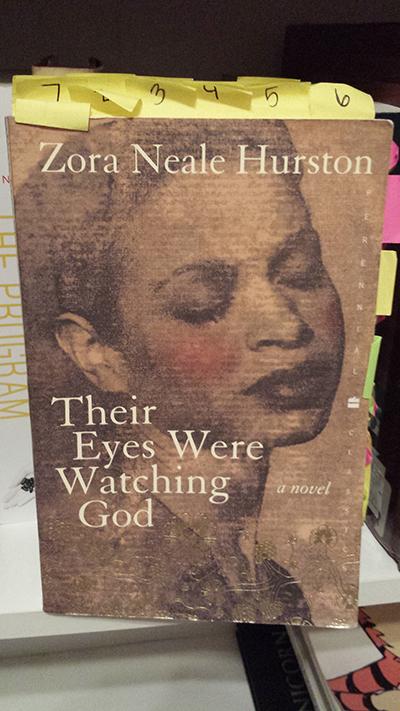 “Their Eyes Were Watching God”

This book definitely turned into a struggle for me to rate. Some parts of the novel sucked me in and held on to me until I finished the chapter, but other times I did not even want to open the book because nothing the narrator said lured me in. Eventually though, I came to the conclusion that a score of four paws suited the book.

“Their Eyes Were Watching God” follows the life of Janie Crawford in her quest to find her identity and discover life. The story takes her from her nanny’s plantation, to a forced marriage, to all-black Eatonville, on a wild adventure to the Everglades, and in a mixture of serenity and defeat, back to Eatonville.

This book ended up surprising me. Reading through Janie Crawford’s life, noticing her struggles and having to bear her internal and external conflicts alongside her helped keep my attention. Still, the thing that fascinated me the most resulted from the fact that Janie held such a powerful and independent role in the novel. I actually enjoyed the rebellious and sometimes arrogant decisions she made and in many situations agreed with them. Unlike other novels, Hurston made all of her characters full of flaws. No matter their role, all the characters made mistakes and payed the price, which really blurred the stereotypical line between hero and villain.

Along with that, Hurston perfected the skill of reeling her readers in. Revealing the fact that one of the main characters will die a heart wrenching death tops my list of “Best ways to start a book.” I know that made me want to keep reading. In the end, that little foreshadow at the beginning really made the book. It became exciting to read and wait for Janie to meet the other character. Then, after I met the character, Hurston kept me on edge waiting for his inevitable death.
Due to the novel’s relatively easy to comprehend storyline and the large combination of genres, I would recommend it to most anyone looking for a change of pace.