Beyond the side lines 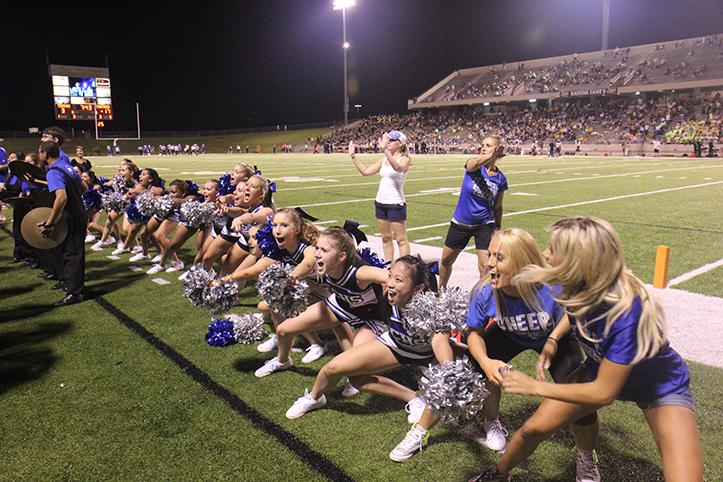 The once roaring field now lays silent as the teams and crowds begin to clear out the stadium. Players grab their helmets, Silvies pick up their pom-poms and the cheerleaders grab their megaphones, some for the very last time.

Although the football season came to an end, the cheerleaders’ schedule does not end there. For them, there is always work to be done.

“I think that’s when it hit, that senior year is all about the ‘lasts’, and that was actually the last time we would be there at [Berry Center] and walk on the field and be there as a team rather than individuals,” senior Chelsi Medrano said. “Knowing that it was my last season just to stand in front of the student section and have them say cheers back to us and just hearing drumline for the last time, it really hit home.”

“It didn’t even seem like it was my last football game,” senior Lindsey Rau said. “Normally I would’ve thought that it would be really emotional and sad.”

With the football season coming to a close, the cheerleaders grew accustomed to their performances and routines on the field. Senior Kayla Garcia said leaving this behind felt strange.

“It was kind of surreal, because it doesn’t seem like the last [football game],” she said. “Every football game is kind of routine, like we have to do the same exact thing, and it was kind of weird being with all the girls I’ve been cheering with for the past three years and being ‘this is it, this is the last one.’”

Despite the last football game of the season falling on a Saturday afternoon, Medrano said the cheerleaders still knew their time on the field was coming to an end.

“It was definitely different,” she said. “The day was so much fun but towards the end we could tell that like there was only two minutes left that we were going to be on the field.”

The teams, student sections, drumline and coaches, Garcia said she will miss the special atmosphere the most from this season.

“Definitely the Friday-night football-feel, like being in front of the student section and seeing everyone get excited for the guys who were actually playing and I guess just the community feel of everyone coming together for one thing,” she said.

For others, they will miss the sisterhood that comes along with the program the most.

“Those were 17 of my sisters that I won’t have with me at college next year, which will be difficult,” Medrano said. “That’s something I’ll never get back and definitely miss, just that bond.”

As the season ends, the cheer program turns their sights upon other things, such as cheering at basketball games, wrestling matches, and performing a two-minute routine at Mr. Cy Creek, the seniors’ last performance. With the end of the season comes some extra free time for the girls. While no longer on a strict weekly schedule, head coach Nicole LeClaire and junior-varsity coach Allison Marz hold the girls to the highest standards.

“It’s not as much staying after school and doing the planning like streamers and making the big signs because we stay like two hours after making those big signs and all that, so we definitely have more free time but we still have to be ‘perfect’ as we were before,” Garcia said.

The program has given the girls a second family.
“It gave me more of something to lean on with the people who are in it, and I met most of my best friends through cheer,” Garcia said.

And although the cheerleaders walked the field for the very last time, together as a team, regret does not stain their memories.
“It was definitely a great way to leave Cy Creek, and I can’t imagine my high school career any other way than it did, and I have cheer to thank for that,” Medrano said.