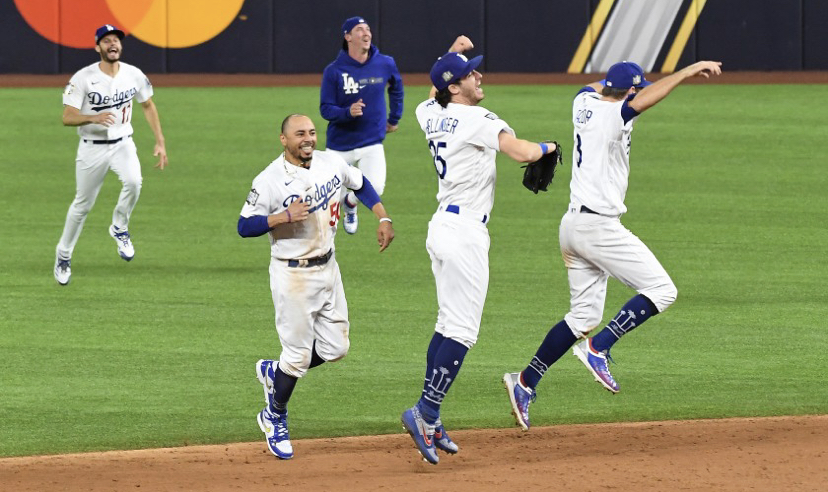 Every year baseball fans long for the appearance of their home team battling for their spot in the annual MLB World Series. The 2020 season brought countless surprises and unexpected twists along with it, including the drastically shortened schedule of just 60 games compared to a typical 162 game season.
The title of this baseball season’s unique championship goes to the Los Angeles Dodgers as they snagged a six-game series against the Tampa Bay Rays. The Dodgers have made three World Series appearances previous to the 2020 season, however, this is their first championship title since 1988. Despite the 32 year dry spell of Series losses, LA fans are ecstatic for their teams clenching 2020 World Series win.

Here’s a recap of each game in the Series:

Game 1
The Dodgers take the field at the beautiful Globe Life Park in Arlington, TX as the home team of the first game in the Series, a place they will call home for the next seven days. Their ace Kleyton Kershaw takes the mound and delivers the first pitch of the 2020 World Series. He goes four scoreless innings and pitches a no hitter into the fifth. Until Tampa hitter Kevin Kiermaier hits a screaming home run into the right field bleachers ending Kershaw’s five-inning streak. Tampa continued hard into the seventh before scoring two more runs off hits from Mike Brosseau and another clutch hit from Kevin Kiermaier, to score the Rays final runs of game one. Meanwhile the Dodgers hammer Ray’s starter Tyler Glasnow and their bullpen relievers who stood no chance against the red hot Dodgers, eventually scoring eight runs and over ten hits throughout the game. LA took game one of the series with an 8-3 win over Tampa.

Game 2
Once again the Dodgers take the field as home team defenders of last night’s 8-3 victory. When just eleven pitches in, Dodgers pitcher Tony Gonsolin gives up an opposite field home run to lefty Brandon Lowe, ultimately setting the tone for the rest of the game. As the second inning arrives, Dodgers make a risky decision to bring in new pitcher Dylan Floro, who goes unhit into the fourth. The Dodgers continue to plow through Tampas offense until the third pitcher of the game for LA comes in later that inning, only to give up two and end the shut out. Tampa on the other hand goes four scoreless with the help of Blake Snell into the fifth inning, which brought along an unanticipated two-run home run from Dodgers hitter Chris Taylor, closing the distance to just a 5-2 lead for Tampa. The top of the sixth brought the final run Tampa would score, off of a sacrifice fly from Joey Wendle spring in a runner on third, making it six to two Tampa. As a last ditch effort, the Dodgers hit two more long balls in both the bottom of the 6th and 8th, ultimately concluding LA’s rally and sealing game two with a 6-4 Tampa victory.

Game 3
Game three showcased Tampa’s first homestand of the 2020 World Series as they sent out their ace, Charlie Morton on the mound to hopefully take the edge in this series. The Dodgers came out of the gate strong, taking Morton deep off a home run by LA’s 3rd baseman Justin Turner with just two outs in the first inning. In successive third and fourth innings, the Dodgers make even more trouble for the Rays stringing together several consecutive hits, ultimately scoring five runs in just the two short innings. Tampa responds to LA’s rally by getting two back to back stand up doubles down the left field line, however only score one run during the fifth. Catcher Austin Barnes scores LA’s final run with a solo blast over the right-center wall in the sixth, making it a detrimental 6-1 lead for the dodgers. In Tampa Bay’s final at bat of the game, Ray’s MVP Randy Arozarena hit a screaming two out homerun out over left field, making it a 6-2 game. However, the rally promptly comes to a close when the next batter, Choi Ji-Man lines out to left field, concluding game three.

For the second night in a row, Tampa takes the field as the home team with Ryan Yarbrough on the mound, ready to get the Rays a series tying win. With the Dodgers up to bat, Justin Turner hit a towering two out home run into center field to make it an early 1-0 lead for LA. The third inning brought along another booming home run off the bat of Corey Seager into right field thanks to a hanging breaking ball delivered by Yarbrough. Tampa responded in the bottom of the fourth with their own long ball from Randy Arozarena resulting in a two to one ball game through the fourth. The Dodgers have an eventful fifth through eighth inning scoring a total of five runs, however the Rays score similarly, going into the ninth with a score of 7-6 Dodgers lead. As the Rays take their final at bat of the game, and their final chance to take home the victory, all hopes ride on the result of this inning. Right fielder Brett Phillips is up to bat, with a disappointing average of .196 in the regular season, and 0 for 2 in the postseason. On the fourth pitch of Phillips at bat, Dodgers pitcher Kenley Jansen hangs a breaking ball on the inside part of the plate. Phillips makes no hesitation to take advantage of it, lining a walk off single into center field scoring the needed two runs for a Tampa Bay victory.

Game 5
Coming off the momentum of the previous game four, Tampa hosts the Dodgers for a game five, with a series score of 2-2. Tampa pitcher Tyler Glasnow takes the mound representing the Rays in the top of the first. Only seven pitches into his first batter, Mookie Betts, Glasnow gives up a lining double into the left field corner, followed by a run scoring single into right off the bat of Corey Seager. Later in the same inning, catcher Austin Barns bounces a two out dribbler up the middle to score the final run of the inning. Moving into the 3rd LA’s Joc Pederson hits a no doubt home run into Tampas bullpen to make it a three to nothing ballgame. The Rays respond in the bottom of the third with a rally of their own, when Yandy Diaz smokes a run scoring triple into the right field corner past LA outfielder Mookie Betts making it a 1-3 game. Later accompanied by a clutch single from DH Randy Arozarena ending the inning with a score of 3-2. The final run of game five came in the fifth inning when LA hitter Max Muncy launched the second solo home run of the game for LA, ending the game at a four two LA victory.

Game 6
Representing the dodgers on the mound for what will be the final game of the World Series is pitcher Tony Gonsolin. He makes quick work of lead off hitter Choi Ji-Man for one out in the first. However LA finds themselves in a bind, when Tampa Bay all star comes up to bat and lines a solo home run over the right field wall just four pitches into the game giving Tampa an early 1-0 lead. A pitcher’s duel ensues between Tampas Blake Snell and a combination of LA starter Tony Gonsolin and their bullpen going into the 6th. Aligning hits from catcher LA catcher Austin Barnes, right fielder Mookie Betts, and shortstop Corey Seager brought along a game defining two runs for the Dodgers in the bottom of the sixth. The Rays continued scoreless through the ninth keeping at just one run from the solo shot by Yandy Diaz in the first inning. The 8th inning brought along the nail in the coffin for Tampa Bay’s Series when LA’s Mookie Betts hit a moon shot, once again into Tampa Bay’s bullpen over the left-center wall. The ninth inning held the momentus 2020 World Series victory for the Los Angeles Dodgers, their first one in thirty two years. LA played an amazing series this year, with their powerhouse team and unstoppable line up, the Los Angeles Dodgers deserved their 2020 World Series title.