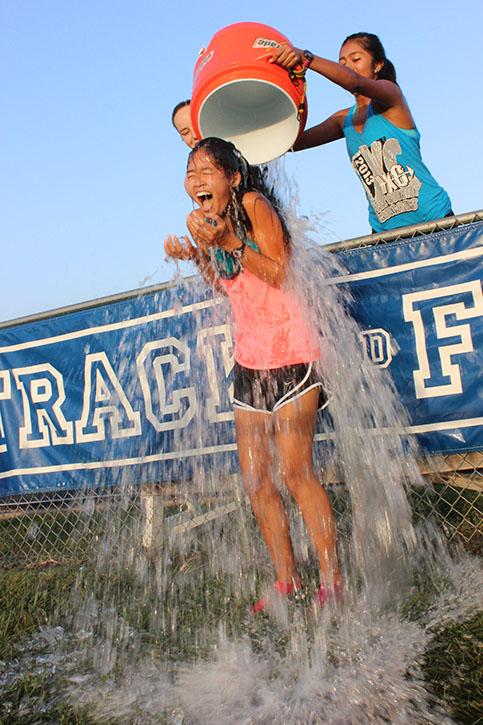 The Amyotrophic Lateral Sclerosis, or ALS, Ice Bucket challenge requires a person to be filmed while having a bucket of ice water dumped on them within 24 hours after being nominated. If they choose not to, they must donate $100 to benefit the Amyotrophic Lateral Sclerosis Association, or ALSA. The ALS Ice Bucket challenge served to spread awareness of the trend and not the disease. People should not exploit the challenge for their own benefit when it stands for such an important and underrated cause.

By expecting people to choose between donating or doing the challenge, the ALSA is not receiving money from a huge sum of people who choose to do the challenge and not donate. These videos ignore the original purpose of the challenge and exploit it for internet popularity. Out of 1,500 videos surveyed by RJMetrics, only 20% mentioned donating to the ALSA and 25% did not mention ALS. Accepting the challenge but not giving proper credit to ALS research does nothing to help the donations and awareness of the disease. While those with an active presence on social media gained limited information from the challenge, the majority of people did not gain any knowledge that will last longer than the trend.

While people know about the rarity of ALS and the effects on the brain, more in-depth information about the disease remains unknown and unresearched. Although a spike in donations to the ALSA occurred and the popularity of information about the disease did spread, this only resulted because of the trending of the Ice Bucket Challenge online. Spreading important information through a fragile and changing industry does not result in a permanent interest in finding a cure for ALS. As the obsession on social media with the challenge winds down, so will the donations and sharing of information.

The Ice Bucket Challenge has not provided a permanent rise in public interest for ALS that would outlast the popularity of the challenge itself. To combat the decrease in popularity of ALS information, the public school system should make information about ALS a staple in the education of all children. Health classes in schools should inform students about not only ALS, but other diseases with low recognition in the same way they’re taught about the more well-known conditions. Teaching students about uncommon diseases should be a mandatory in all health class curriculums during the lessons that include more well-known ailments. Providing generations of children with information about a disease will benefit the cause to find a cure for these diseases much more than an Instagram post.