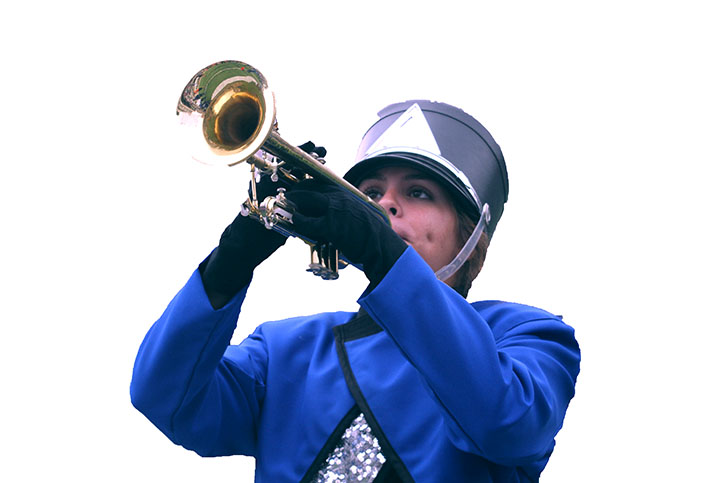 Junior Maria McEvoy raises her trumpet and steadies her breathing, watching for her conductor’s cue. She begins to play in harmony with the rest of her bandmates- then does it all again the next day.

McEvoy started band in the sixth grade and currently plays trumpet in Symphonic band. She spent last year making great progress and successfully auditioned for the highest level of band at school.

“Concert two is the lowest level; I worked my way up from there through concert one to this year,” McEvoy said. “Your progress through the year is monitored too, [so] you can’t goof around and make it into Symphonic.”

Students must audition for placement in Symphonic band. Band director Brian Drake only selects students who will come out on top to represent the school.

“They have to be spectacular on their personal instrument,” Drake said. “Maria is one of the top trumpet players we have.”

During a normal week, McEvoy has band rehearsal and leadership meetings on Tuesdays and Thursdays, until around 6:30 p.m. Depending on the football schedule, she practices and performs at the varsity games on either Friday or Saturday. McEvoy stays flexible while trying to keep band balanced with the rest of her life.

“I would say band is about 25 percent of my time, leaving about 50 percent for school and the last 25 percent for leisure,” McEvoy said. “Our band schedule is subject to change a lot though, like sometimes our off days change or we get held over for rehearsal.”

Band members see a lot of activity, specifically during homecoming week. They pack extra rehearsals in with their normal schedules to prepare for multiple school events.

“I have band every day of homecoming week until Saturday,” McEvoy said.

The band plays a huge part in the first spirit rally of homecoming week, the Lighting of the CCs, Friday afternoon pep rallies, and of course, the homecoming game on Friday night. McEvoy also makes time for the band’s area competition, which has fallen on the same day for the past few years.

“Having a competition the day of the dance doesn’t bother me really,” McEvoy said. “We always have time to go to the dance if we want.”

Homecoming only contributes part of the band’s calendar; they stay busy throughout the year. Marching band begins in August and continues until November. Football in October brings more performances to the calendar, then the band focuses on region competition and the Winter Concert. By spring semester, McEvoy prepares to march again.

“There’s a huge marching day at the end of second semester, so it all kind of revolves back around,” McEvoy said.

Band students learns several music pieces for all the band events. The band’s marching show consists of one routine on its own, plus any songs they play for the Silvies each week and a post-performance formation. Outside of all the routines and music surrounding marching band, McEvoy must also learn her regional music as well as three pieces of music for Winter concert and additional songs for second semester.

“There’s also the optional jazz band, which is just for fun,” McEvoy said. “I participated in that last year so that would be another three pieces of music. The year usually wraps up with us getting our new marching show for the next year and the process then repeats itself.”

Despite the busy schedule and workload, McEvoy said she enjoys being in band. She spends a lot of her time improving her trumpet skills, and the rewards make up for the hard work.

“It’s taught me to be more outgoing and confident which is something I had a bit of a hard time with prior to being a band member,” she said. “Band also really helps instill the idea that with hard work comes great rewards. This idea is something that I learned there but can also apply to many other aspects of my life. ”

Being part of such an organization allows band students to meet many people, most of which become their closest friends. Junior clarinet player Penelope Azocar started band in the sixth grade as well, and made it into this school’s Symphonic band her freshman year. This is the first year Azocar has been in band with McEvoy, which means they spend even more time together.

“We are best friends, so we spend a lot of time together inside and outside of band anyway,” Azocar said.

Members from symphonic band and students like McEvoy and Azocar who’ve been in band since middle school all agree spending so much time around fellow band kids forms friendships lasting through all of the band’s schedule.

“Band is a major part of my life; it’s hard for it not to be,” McEvoy said. “It can be overwhelming, and it takes up a lot of time, but I’m always willing to do it.”