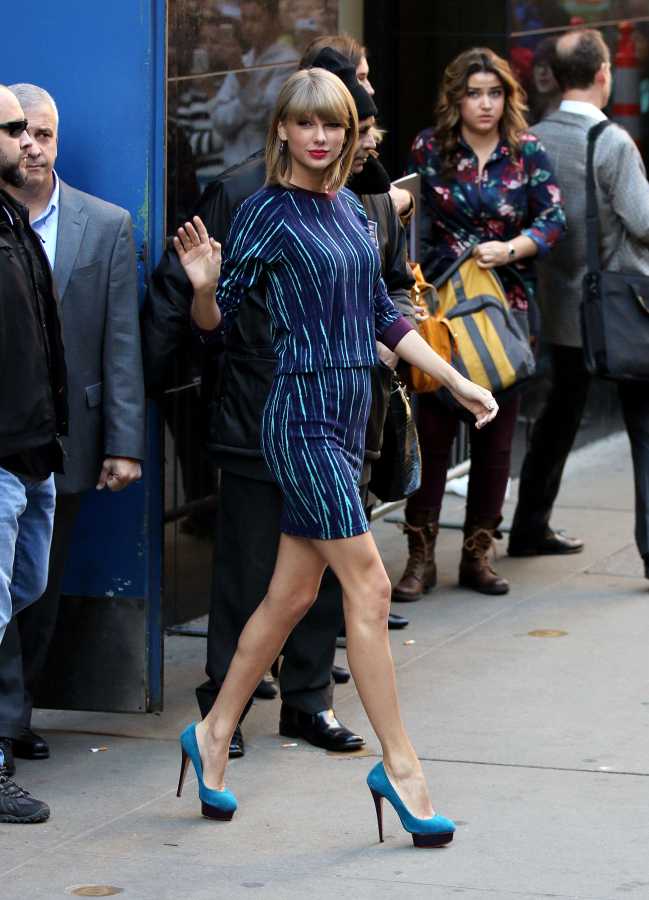 Back at it again, pop princess of the decade Taylor Swift has just released her latest album “1989.” Recently, we’ve watched the singer’s style slowly transform into a more pop sound, but until “1989” she hasn’t released an album yet that doesn’t include a country song. This time around, she’s taken a complete 180 degree turn from her country days and it’s marvelous. As if she’s keen to give her biggest critics a metaphorical smirk, Swift managed to take the everchanging music market and adapt to it in a way that best benefits everyone.

The song opens, and it’s hard not to question if this is Taylor Swift. Electric keyboard tunes and clapping ensue as the beat builds and Swift sings about walking through crowds. It’s evident right off the bat this is a big city anthem. “Welcome to New York, it’s been waiting for you,” her voice echoes. More like “welcome to beautiful bubblegum pop music”

More catchy pop beats. There’s a childish sort of ring, almost like there’s a xylophone playing in the back, but the lyrics are another story. Taylor Swift continues to take out the haters in a very subtle way, singing “I can read you like a magazine” to her next ex-to-be, not giving a care in the world for critics who claim she dates and breaks too much. All about inviting the next boy in, Swift coyly sings “I’ve got a blank space baby, and I’ll write your name.” It’s hard not to think of a black widow luring in her next victim… But in the most amazing and woman-empowering way possible.

This song opens almost like Daft Punk’s songs in “Tron Legacy”… Not quite as epic, but pretty close to it. The lyrics are so high school. “Midnight, you come and pick me up, no headlights,” Swift sings. This track keeps a steady beat as the lyrics go on to talk about a boy who slicks his hair back, wears white t-shirts and is comparable to James Dean… Harry Styles maybe? Who knows. Either way, it’s catchy as ever.

“Out Of The Woods”

Like every former song so far, this one catches you from the start. Swift takes on a low and sultry voice. An echoing male singer can be heard in parts singing words comparable to M83’s nostalgic sounds. “Are we out of the woods yet? Are we in the clear yet?” Swift asks her lover. It’s a little bit heart-wrenching; she sings about feeling alive with someone and how it was difficult for the couple to be themselves in public.

“All You Had To Do Was Stay”

A little slower compared to previous songs, this track comes off as somewhat lack-luster. It’s soft, with more of a lazy beat, and the lyrics are all pining and angst. “It could’ve been easy, all you had to do was stay,” Swift sings. The harmonies are reminiscent of her country-genre years.

“I Wish You Would”

Apparently Taylor Swift had a lot of late night drives with exciting boys. “Its 2 AM, in your car, windows down, pass my street, the memories start,” Swift sings. There’s also an emphasis on guitar in this track that hasn’t been evident in the album yet, which is about the most interesting thing in this song.

This song sounds suspiciously like Icona Pop’s hit single. It’s another anthem and a call-to-action set to a contagiously uplifting beat. “Don’t think it’s in the past, these kinds of wounds last,” Swift sings. She’s essentially slapping an ex in the face on this track – telling him what he’s done can’t be taken back and she’s not forgetting any of this. Tell ’em, T-Swift.

Everything about this song screams Lana Del Rey. Sultry and coy, Swift sings and sighs about her secret affair with a bad boy. She knows the relationship will end soon, and they’ll only see each other again in their wildest dreams.

“How You Get The Girl”

Not as catchy as the rest of the album, this track has an upbeat strumming guitar that seems to fall flat as the song progresses. The lyric “that’s how it works, how you get the girl” is repeated ad nauseam and the synth additions to the song are reminiscent of Britney Spears’ music in the early 2000s.

A good rainy day song, this track is echoing and slow. A hazy feeling washes over as Swift sings “this love is good, this love is bad, this love is alive.” It’s peaceful, calming, and intimate. You can tell Swift is losing someone close to her that she loved – their love is ebbing like an ocean’s tide and she is learning to let go in hopes of meeting it again. The song captures the lyrical intent perfectly.

Immediately the eerie and sinister piano of this song draws you in. What is Taylor going to sing about now? Something scandalous, presumably. The paparazzi have found Swift and her lover in this song. Swift is caught with her lover’s “hand on [her] waistline,” but knows places that will take them away from unwanted attention. The song takes on an almost detective-themed sound, and we get an image of Swift and her latest man on the run from their public lives.

This track has… well, a very clean sound. The song takes on a watery feel – with the klinkling lilt of xylophones, the music could bring the listener into a trance like state. Swift sings about the rain pouring down (or her tears, probably) that cleaned her, and she could “finally breathe by morning.” It’s a good end to the album as we see Swift slowly getting over her heartbreak.