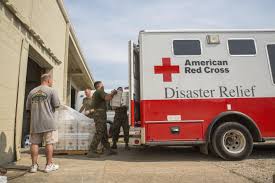 The prominent charity the American Red Cross remains the number one relief organization after crises since 1881, working with the federal government to assist the United States Armed Forces and provide generous contributions to multiple worthy causes across the globe. The American Red Cross has faced controversy over certain crises throughout the past years as a result of concerned communities uncertain with what percentage of donations actually end up in victim’s’ pockets.

However, certain flaws in this organization pale in comparison to all the dedicated volunteers and charitable donors that drastically change awful situations with their abundance of resources. During the recently devastating Hurricane Harvey,  the Red Cross supplied more than 250,000 meals after the storm made landfall. In addition, the Red Cross provided 45 million dollars to 100,000 damaged households. This one example clearly depicts why the American Red Cross remains a positive support system for our society.

This abundance of resources reaches all parts of the nation.The Haiti earthquake of 2010 provides another example of the Red Cross’ generosity. The Red Cross worked twice as hard in order to successfully deliver food and water to countless people due to the lack of a stable and wealthy government in Haiti. They greatly contributed to the progress made in Haiti to improve the situation to the best of their ability.

Additionally, Red Cross assisted in 2012 throughout the tragic Hurricane Sandy. Multiple controversies occurred from their time there; however, they have since released charts on their website stating where the money helped the efforts still taking place. While some claim they did not spread the donations across the board in the correct way, in reality the Red Cross gathered seven million dollars worth of relief items, $17 million in meals and snacks and several thousands in all other areas.

Overall, the Red Cross organization contains an incomparable amount of dedicated volunteers that risk their lives to help others. They remain the most impactful group that people choose as a first response due to their rich history of helping others. Despite the fact that the Red Cross’ reluctance to supply efficent information concerning where the money goes, they keep true to their word by remaining one of the most trustful and reliable organizations.